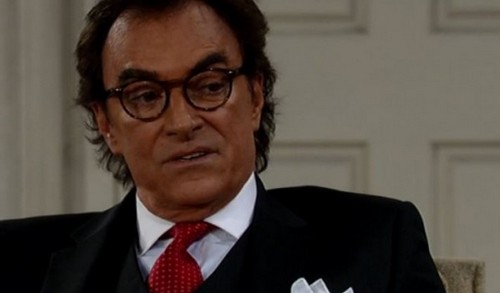 The month of April is rapidly winding down, and that means May Sweeps are nearly upon us, and soap fans are in for some jaw-dropping revelations and twists to boost their favorite daytime drama’s ratings. General Hospital spoilers have confirmed that Victor Cassadine will be returning to GH on May 1st for a brief appearance.

Victor Cassadine (Thaao Penghlis) left Port Charles back in March with fan favorite Robin Scorpio-Drake in tow. He dragged the medical genius off to an undisclosed location to “de-ice” his sister-in-law Helena and nephew Stavros. Cassadine convinced the doctor to accompany him by revealing that Jason Morgan is indeed alive, and giving her the opportunity to save him as well. Before Cassadine left General Hospital fans were shocked to learn that he had been working with the evil doctor Liesl Obrecht, and shared a romantic history with her.

Recently in a shocking twist it was revealed on General Hospital that Detective Nathan West is actually the son of Obrecht, but was raised by her sister Madeline (formerly known as Magda). GH fans have been speculating since the reveal who Nathan’s father may be. Although Liesl was in a relationship with Cesar Faison, there is now also a chance that Victor Cassadine could be Nathan’s father. The fact that Madeline raised Nathan instead of Liesl leads us to believe that Victor very well may be Nathan’s father. Liesl was infatuated with Cesar, borderline obsessed, a child that wasn’t his could definitely thwart her relationship with the criminal mastermind and it would make sense that she pawned him off on her sister when he was an infant to hide her infidelity.

What do you think General Hospital fans, could Victor Cassadine actually be the father of Liesl’s son Nathan? Nikolas Cassadine may have a long lost cousin out there, and that would make Nathan an heir to the Cassadine fortune, which would also turn out to be a pretty interesting plot twist. Share your thoughts and theories in the comment section below and don’t forget to check CDL tomorrow for more General Hospital spoilers and speculation.