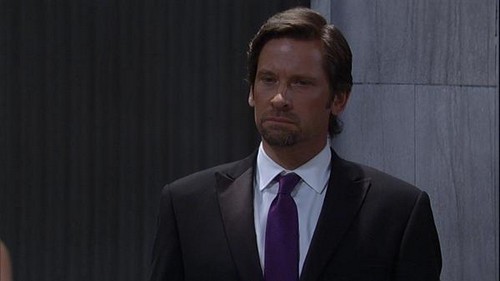 General Hospital spoilers tease another week of action packed episodes during November 10-14. Ava Jerome may have escaped a cold-blood murder at the hands of Sonny Corinthos, however she did lose her baby to psychopath Nina. According to General Hospital spoilers, the week of November 10 kicks off with an epic Ava (Maura West) meltdown, meanwhile across town Nina (Michelle Stafford) continues to become more delusional and completely out of touch with reality when it comes to her new bundle of stolen joy.

According to General Hospital spoilers, Jason Morgan AKA Jake (Billy Miller) decides to take Liz up on her offer and move in to her house to live with her and her boys since he has nowhere else to go. During the week of November 10 GH fans can expect to see Liz devote her time to trying to help Jake jar his memories, and she introduces him to his wife Sam Morgan (Kelly Monaco).

Nathan and Dante head out to locate Sonny Corinthos (Maurice Benard) and arrest him for the murder of AJ Quartermaine, however General Hospital spoilers tease that they actually walk right in to a dangerous trap. GH fans can also expect to see Nikolas and Britt receive a surprising guest, Kiki make a horrific discovery, and Shawn and Jordan contemplate their next move, all during the week of November 10.

So General Hospital fans, do you think that Michael (Chad Duell) shoots and kills Sonny? What trap could Nathan and Dante possibly walk in to? Will someone be able to get Ava’s baby back from crazy Nina? Could Jake remember Sam? Let us know what you think in the comments below and don’t forget to check CDL tomorrow for more General Hospital spoilers and news.