General Hospital Spoilers: Will Sonny Kill Ava Or Will Michael or The Police Get Him First – Is Carly Shot By Heather? 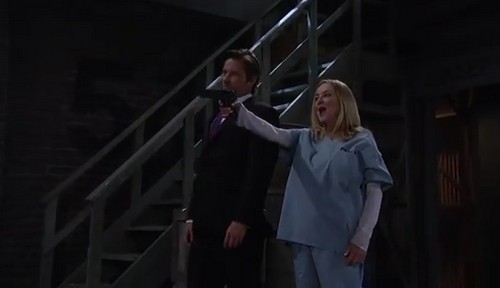 General Hospital spoilers have been teasing for months that Sonny Corinthos wanted to kill Ava Jerome to avenge his girlfriend Connie, who Ava murdered in cold blood. The only thing keeping Ava alive was the fact that she had a Corinthos bun in the oven, and was pregnant with either Sonny’s baby or his son Morgan’s baby. Unfortunately on the November 5 episode of the ABC soap Nina Clay stole Ava Jerome’s baby, and her life insurance policy.

General Hospital spoilers reveal that Ava Jerome might finally meet her maker, and considering she was just drugged and gave birth – Sonny Corinthos definitely has a leg up on her. In a General Hospital sneak peek video for Thursday November 6 a distraught Ava opens the door to find Sonny standing on the doorstep. Sonny taunts, “Aren’t you going to invite me in,” while Ava looks on terrified. Once Sonny realizes that she is no longer pregnant – it’s open season on the mobstress.

General Hospital Rumors have been floating around that Michael plans to kill his father Sonny with Max’s gun after learning that Sonny shot AJ. But, if Michael plans to take out Sonny – he is going to have to beat the Port Charles Police Department to him. Scott is determined to bring down Sonny and in the promo video for November 6 he can be seen screaming to Anna Devane, “Everyone who helped Sonny get away with murder will pay!” Naturally Anna should be concerned, because her boyfriend Duke fits in to that category since he lied about Sonny’s alibi.

According to the General Hospital spoiler video – Carly’s days appear to be numbered as well. After all, anyone who has psychotic Heather Webber holding a gun to their head has a pretty low survival rate. And, it doesn’t help that Franco is egging his crazy mother on. Heather informs Franco she “would be more than happy to shoot Carly,” for him.

So GH fans, what do you think of all the insane drama so far this week? Do you think that Sonny will kill Ava Jerome? Or will Michael Corinthos or the PCPD take him down before he has a chance? What about Carly, is Heather really going to kill her? Let us know what you think in the comments below and don’t forget to check CDL tomorrow for more General Hospital spoilers and news.