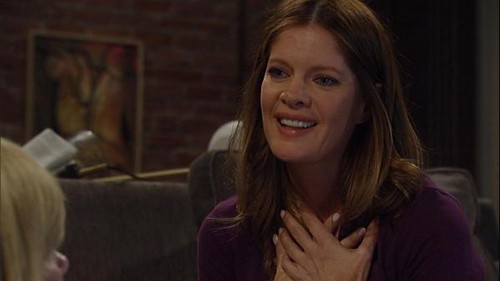 General Hospital spoilers and news teased that the week of November 3 would be an epic one for the ABC soap, and so far the rumors have been 100% correct. Monday’s episode of GH ended with a slew of cliff-hangers, and according to an all new General Hospital sneak peek for Tuesday November 4 – some of our questions will be answered, like who shot up Sonny’s house and wounded Max?!

There is a lengthy list of Port Charles residents that would love to put a bullet in Sonny Corinthos, however the majority of them were accounted for at the time that Max was shot. Franco and Michael have clear motive, but they were still at the wedding. Ava Jerome has good reason to want Sonny dead, but she is busy fighting for her own life and pleading Nina not to take her unborn baby. So, the most logical theory is that Max’s shooter was Franco’s mom Heather Webber. She is mentally unstable, running around PC with a gun, and furious with Sonny for having Shawn kidnap her. According to the General Hospital spoiler video that was recently released, there is a good chance we will find out tomorrow. In the promo video Sonny kneels beside Max and demands to know who shot him. (Fingers crossed Max is still alive and can ID the mysterious gun man, or woman.)

The General Hospital spoiler video for November 4 also shows crazy Nina Clay informing her hostage Ava Jerome that it is “time to birth the baby.” Meanwhile, Dr. Obrecht corners Nina’s mom Madeline and demands to know what prescriptions she and Nina were writing (most likely the ones Nina is using on Ava right now), and Silas and Nathan are putting their heads together and trying to figure out where Nina is and what she is up to. The General Hospital promo also teases that on November 4 Michael will have a wild meltdown at Franco and Carly’s almost wedding, and he can be seen screaming like a mad man.

So GH fans, what do you think of the spoiler video for tomorrow’s episode? Do you think that Nina will deliver Ava’s baby before Silas, Nathan, or Sonny and Morgan get to her? Who do you think shot Max, was it Heather? Let us know what you think in the comments below and don’t forget to check CDL tomorrow for more General Hospital spoilers and news.