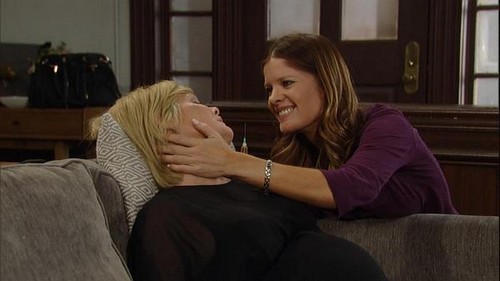 General Hospital spoilers are tough to come by during the month of November: the network released the news that they were “going dark” a few weeks ago, and would be keeping spoilers at a minimum during November Sweeps. We were able to get our hands on some spoilers for the week of November 3-7, although they are very vague.

According to General Hospital spoilers for the week of November 3, Franco and Carly’s Halloween wedding from hell continues in Port Charles. On Monday’s episode of the ABC soap, Morgan and his father Sonny continue to argue over AJ Quartermaine’s death – however, they are interrupted when they hear a gun shot ring out. Meanwhile, across town Nina Clay takes her scheme to a whole new level of crazy.

General Hospital spoilers also reveal that during the week of November 3, Jordan and Shawn’s lives will hang in the balance – and most likely at the hands of Franco’s narcissistic mother, Heather Webber. Speaking of Franco, the November 10 edition of Soap Opera Digest teases that by the end of the week Franco will be back to his pre-tumor serial killing ways.

On Thursday, November 6 GH fans can expect to see Duke having a meltdown when the fake alibi he provided Sonny with the night AJ Quartermaine was murdered comes back to haunt him. And the showdown we have all been waiting for will occur on Friday, November 7 when a heated Michael Corinthos confronts Sonny about killing his father AJ.

So, GH fans, are you ready for another action-packed week of can’t miss drama? Do you think that Jordan and Shawn will survive unharmed? Who do you think gets shot? What will come of Sonny now that his secret is out? Let us know what you think in the comments below and don’t forget to check CDL tomorrow for more General Hospital spoilers.