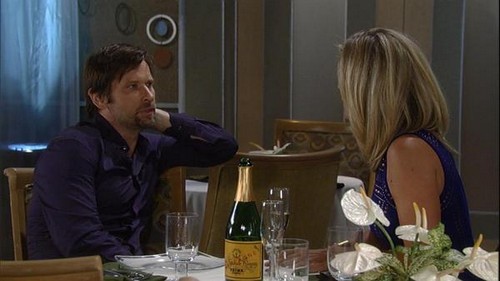 General Hospital spoilers have been teasing that it is only a matter of time before Franco learned that his girlfriend Carly had cheated on him with Sonny Corinthos. Franco has been suspicious of Carly and Sonny for a while, but Carly insisted that they were just friends. However, on September 22 Kiki arrived at Franco’s birthday party overflowing with guilt because she had overheard Sonny and Carly discussing their affair, she revealed to Franco that it was true, Sonny and Carly had sex. Now, the obvious question on everyone’s mind is, how will Franco react?

According to General Hospital spoilers, Franco makes a “shocking announcement” at his birthday party, and there is a good chance that his announcement is that Sonny Corinthos shot and killed Michael’s father AJ Quartermaine. When Franco thought that Sonny and Carly were having an affair before, he made a beeline for Michael and tried to tell him Sonny’s secret, but Carly intercepted him. She reminded Franco that if he told Michael the truth, he would be hurting her son and she would never forgive him. But, now Franco really has nothing to lose. Considering the recent revelations, it’s safe to say he really could care less if Carly never forgives him because he is never going to forgive her.

When Franco reveals Sonny Corinthos’ secret, the fall out is going to be huge. Not only will Michael be devastated and probably disown Sonny and his mother for helping him keep it a secret, Sonny could go to prison. And, we can’t forget that it wasn’t that long ago that Franco was a crazy cold-blooded killer. Sure, that was before he got his brain tumor removed and he seems to be on the up and up now. But, could all of this emotional stress trigger Franco’s crazy side?

What do you think GH fans? Will Franco go through with announcing that Sonny killed AJ Quartermaine at his birthday party, or will he chicken out at the last minute like before? Do you think that Michael will believe Franco, or will everyone just think he is crazy? Could Sonny Corinthos end up in prison over this? Let us know what you think in the comments below and don’t forget to check CDL tomorrow for more General Hospital spoilers.

Update: on September 23 Franco did NOT expose Sonny as AJ’s murderer as many of us suspected he would – his revenge took an altogether different route when he proposed to Carly! Well I guess if he thinks Sonny and Carly are in love again his method of getting back at them actual makes a weird sort of sense.