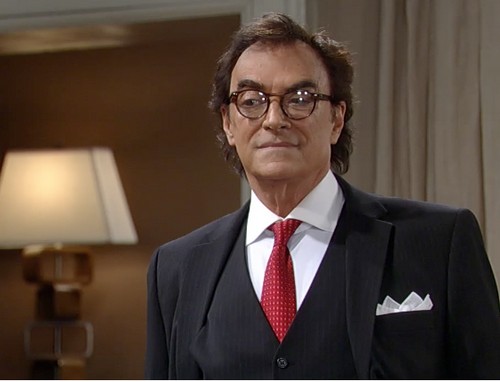 General Hospital spoilers tease a week of crazy drama during September 1-5. GH fans have been speculating for weeks over who Detective Nathan West’s father is, and according to General Hospital spoilers Nathan’s sister Britt begins to speculate a well. According to spoilers in the latest edition of ABC Soaps In Depth, “Who says Britt has a one-track mind? Sure she’s pretty focused on Nikolas, but on Wednesday September 3rd she finds time to ponder who Nathan’s father might be.” General Hospital fans have theorized that Victor Cassadine may be Nathan’s father ever since we learned Liesl Obrecht was his mother, and it looks like we might finally find out!

Patrick’s ex Sabrina recently returned to Port Charles, and Patrick filled her in on the shocking details surrounding their car accident that killed baby Gabriel. According to General Hospital spoilers, Sabrina is enraged when she learns that someone bribed Rafe to run them off the road, and she is determined to find out who the culprit is. Patrick and Sam find themselves kicking their investigation in to over-drive to help Sabrina find the guilty party so she can extract revenge on them. Little does Patrick know, their investigation will probably lead them right back to Crichton-Clark.

According to General Hospital spoilers, Carly and Sonny’s affair heats up on Thursday September 4th. Sonny seems to have some sort of power over Carly, and no matter how many times she convinces herself she is with Franco and that Sonny is not the one she wants, at the end of the day she just can’t resist Conrintho’s advances. GH fans can also expect to see Dante and Nathan rush to save their damsels in distress during the week of September 1st, but Levi is proving to be much more dangerous than anyone gave him credit for.

So GH fans, do you think Victor Cassadine is Nathan’s father? And, what about Maxie and Lulu, will they be rescued this week from crazy Levi? Are you surprised that Sabrina is ready to avenge her son’s death by any means possible? Let us know what you think in the comments below and don’t forget to check CDL tomorrow for more General Hospital spoilers.