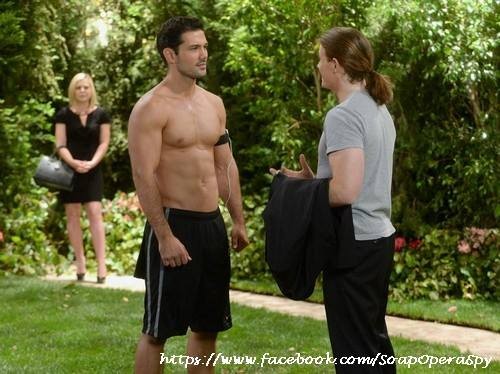 There is always a steady stream of newcomers in General Hospital’s fictional town of Port Charles, but one particular newbie has really stood out. Ryan Paevey first appeared as Detective Nathan West on GH in December 2013, and six months later he is a major player in Port Charles. Considering all of the crime on the ABC soap opera, it is no surprise that West is linked to multiple storylines. And, on top of all of drama, he has been dragged through as a cop; he has a pretty crazy personal storyline as well. It was recently revealed on General Hospital that Nathan is the son of Dr. Liesl Obrecht and Crazy Nina Clay’s ex-brother/cousin.

Since it was revealed that Obrecht is Nathan’s mother, fans have been speculating who his father may be. His sister, Britt, is under the impression her father is the evil Cesar Faison, but it was just revealed that Obrecht also had an affair with Victor Cassadine back in the day. So, there is a huge chance that Det. Nathan West could actually be a Cassadine.

Paevey was interviewed by Soaps.com and dropped a major General Hospital spoiler about another potential twist regarding his character Nathan West’s family history. It turns out we aren’t the only ones who think that Nathan might be a member of the Cassadine Family. The website asked Paevey, “What about Nathan’s father. Do you think we’ll ever meet him and do you have thoughts on who his father might be?” Ryan responded with, “I think we’ll meet him. If I had to venture a guess, I would probably have to say that he’s going to be a Cassadine.”

So, do you think Paevey already knows that Victor Cassadine is his character’s father and he is dropping a major spoiler? Or, is he as much in the dark as we are about his character’s family tree? Do you think that Det. Nathan West is Victor Cassadine’s son? Share your thoughts and theories in the comment section below and don’t forget to check CDL for more General Hospital spoilers.