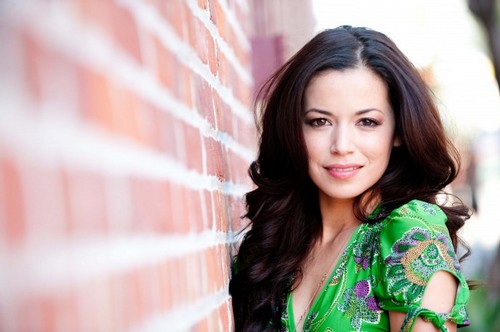 General Hospital fans said goodbye to Sabrina Santiago weeks ago, when Theresa Castillo took some time off from filming the ABC soap opera to give birth to her daughter.  However, according to General Hospital spoilers, in a recent edition of Soaps In Depth, Castillo is back on the GH set so it is only a matter of time before Sabrina Santiago is back in Port Charles and her return date is scheduled for August 21.

Sabrina was ushered out of Port Charles by her cousin Juan after her and Patrick’s son Gabriel was born prematurely and passed away.  Sabrina took some necessary time off after her semi-breakdown the day of Gabriel’s funeral.  GH fans knew that Sabrina would eventually return, but no one knew she would return during such a complicated time.  Ironically, Sabrina is returning to Port Charles the same month that Patrick’s wife Robin Scorpio-Drake reemerged and the same month that the person who ordered Rafe to cause Patrick and Sabrina’s car accident that killed Gabriel.

General Hospital spoilers tease a possible upcoming divorce for Robin and Patrick. And, considering Patrick just told Robin “good-bye” and coldly wished her “good luck with her corpses,” Patrick appears to be single.  There is a good chance that Sabrina and Patrick could pick up where they left off when she returns to Port Charles.  Especially since they are about to learn the Victor Cassadine ordered Rafe to basically kill their baby Gabriel, sparks could fly while they are comforting each other, and bonding over their son’s death.

What do you think, General Hospital fans? When Sabrina returns on August 21st, could she and Patrick rekindle an old flame they shared?  Let us know what you think in the comments below and don’t forget to check CDL tomorrow for more General Hospital spoilers.