General Hospital Spoilers: Robin Divorced by Patrick or Will She Return to Port Charles – Victor to Blame? 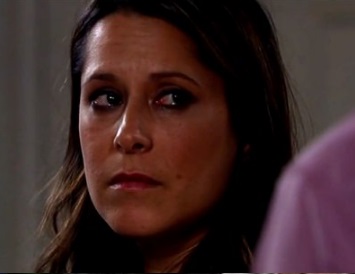 General Hospital fans have thrilled to lots of news lately and have been speculating for months that the iconic character Jason Morgan would be returning to Port Charles, and it looks like we were right! Although TPTB would never confirm that the character was returning, General Hospital spoilers teased that Kimberly McCullough would be returning as Robin Scorpio-Drake, and that was a dead giveaway. This week on GH it was revealed that Robin is still working on Jason, but he is very much alive. And, a General Hospital spoiler video teases that Morgan is waking up!

As of right now Robin Scorpio-Drake is basically being held hostage at Crichton-Clark clinic by Victor Cassadine. When we learned Kimberly McCullough was returning to GH, no one from the soap opera would confirm how long she will actually be on the show this time. For all we know, this could be a week long guest appearance, or she could be back to the show for good. Robin’s hubby Patrick Drake is threatening her with divorce, since she abandoned him and her daughter Emma to save Jason’s life. Patrick has no idea that Victor Cassadine is actually forcing her to stay at the clinic, and ran Patrick and Sabrina off the road causing their accident to send Robin a message.

So, the obvious question on every GH fans’ mind is…what happens next? When Jason Morgan wakes up, will he return to Port Charles? And, who will be playing the part of Jason Morgan? Is it The Young and the Restless alum Billy Miller? Once Jason wakes up, Robin still might not be free to leave. Part of the deal was she had to also “unfreeze” Victor’s relatives Helena and Stavros. Regardless of whether Robin does or doesn’t return to Port Charles, Patrick seems adamant that their marriage is over.

What do you think will happen once Jason Morgan wakes up? Will Robin return to Port Charles, or continue working on the frozen Cassadines? How long do you think Robin will be on General Hospital this time? Share your thoughts and theories in the comments below and don’t forget to check CDL tomorrow for more General Hospital spoilers.