General Hospital Spoilers: Did Victor Threaten and Intimidate Robin By Bribing Rafe To Run Patrick Off The Road? 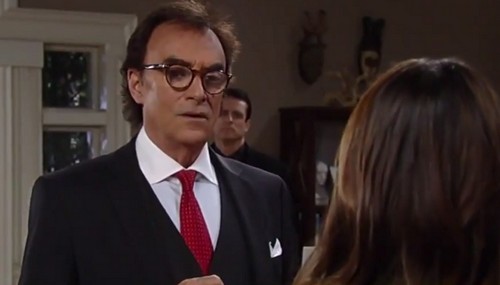 There are so many secrets and mysteries in Port Charles, it is hard to keep track of all of the drama on ABC’s soap opera General Hospital. One particular mystery has been dragged out for several months now on GH. After months of speculation, it was finally revealed that Rafe is the driver responsible for running Patrick and his family off the road, resulting in the death of his premature son Gabriel. However, Rafe also revealed moments before he died that someone forced him to run Patrick off the road and it wasn’t an accident.

Fake Luke and Ava Jerome both threatened to harm Patrick’s family (unbeknownst to him) for totally different reasons, and it wouldn’t be out of the realm of possibility if they had paid Rafe to run Patrick and Sabrina off the road. But, a new General Hospital spoiler is floating around the Internet, and it makes total sense! Fluke and Ava are the obvious suspects, but there is another suspect that no one seen coming.

When Patrick’s wife Dr. Robin Scorpio-Drake jetted off with Victor Cassadine to save Jason Morgan, Helena, and Stavros, Patrick was devastated. Since Robin left back in March, she hasn’t returned once to check on her hubby and young daughter, except for a few phone calls there has been no contact between them. With Patrick threatening divorce and his son passing away, you would think that Robin would have come back to Port Charles by now to make things right with her husband. It wasn’t out of character for Robin Scorpio-Drake to run off and leave Patrick to save Jason Morgan, but it is out of character for her to have not returned home to mend their relationship or check on her daughter by now.

So, what is keeping Robin away from Port Charles? Perhaps she is staying away to save her family. Maybe she already tried to return home to Emma and Patrick, so Victor sent her a warning message by having Rafe run Patrick off the road. Robin may be breaking her family’s heart by not returning home, but she might actually be saving their lives by staying away. And, having Robin stay away from PC to protect Patrick and Emma is the only way fans would accept Robin when she returned. If Victor is threatening her family’s life, then Robin Drake will actually return to PC a hero, instead of a wife and mother that abandoned her family.

What do you think General Hospital fans? Do you agree with the theory that Victor Cassadine had Rafe run Patrick off the road to send a warning message to Robin? Let us know what you think in the comments below and don’t forget to check CDL tomorrow for more General Hospital spoilers.