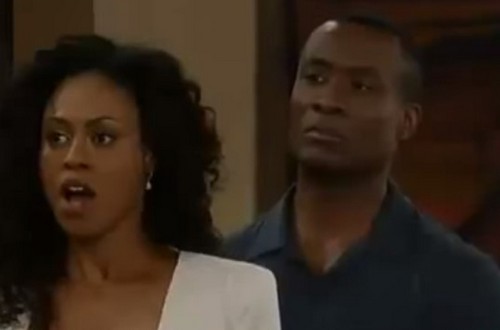 General Hospital spoilers for the week of July 28 – August 1 tease an explosive week of drama when an explosion rocks the lives of our favorite Port Charles residents. It was revealed earlier this month that an explosion would occur on General Hospital, and according to spoilers the explosion occurs at Alexis’s house. Who would want to blow up Alexis’s house? Someone who is trying to teach Julian Jerome a lesson! Mickey Diamond didn’t take too kindly to Julian’s threats about his family, and Julian is convinced that the explosion at Alexis’s house was a warning from Fake Luke and his henchman Mickey.

When Mickey isn’t trying to kill everyone that Julian’s loves during the week of July 28th, General Hospital spoilers tease that he is doing some investigating in to TJ’s mom Jordan Ashbury. According to GH spoilers, on July 29th Mickey will learn that she is actually an undercover DEA agent, and she is in serious danger!

General Hospital spoilers also tease that the walls are closing in on Sonny Corinthos now that he doesn’t have his insurance policy living under his roof. Ava Jerome confessed to her brother Julian that Sonny shot and killed AJ Quartermaine, and Julian informs Sonny he knows his secret. The Jerome Family aren’t the only people with a vendetta against Sonny though. Ava enlists the help of her enemy Franco to take down their common nemesis Sonny, and Franco sneaks on to Carly’s laptop in search of a copy of the video that they had of Sonny killing AJ for Ava.

According to GH spoilers, Sam is devastated when she catches Silas and Nina together. However, by the end of the week she and Patrick will stumble across some damning evidence against Nina and will realize that Silas’s innocent crippled wife..isn’t crippled and is far from innocent.

So GH fans, do you think that Alexis will be hurt in the explosion at her house? Or were Mickey and Fake Luke just sending Julian a warning? Do you think that the mobsters will kill Jordan when they learn that she is an under-cover agent? Let us know what you think in the comments below and don’t forget to check CDL tomorrow for more General Hospital spoilers.