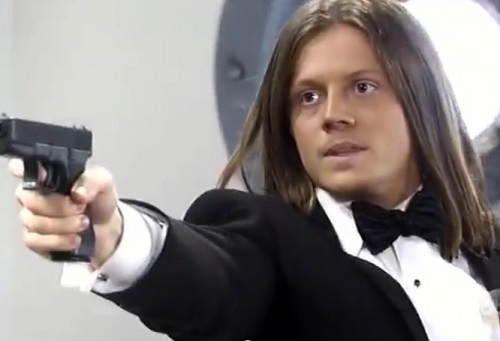 In the GH spoiler video Kimberly McCullough returns as Dr. Robin Scorpio Drake. At Crichton-Clark with Patrick, Robin exclaims “Jason’s waking up!” as she looks down at a hospital bed. Robin left Port Charles months ago with Victor Cassadine, to revive Jason Morgan and a few members of the Cassadine family. Fans have been waiting to learn whether or not CBS alum Billy Miller will be playing the part of Jason Morgan, and it looks like this week we might finally find out!

The General Hospital spoiler video also teases that we will learn who told Rafe to run Patrick and Sabrina off the road, resulting in the death of their premature son Gabriel. Right before Rafe crashed his car in to a barricade, he confessed to Molly that the accident was intentional and someone instructed him to run Patrick off the road. In the promo Molly suddenly remembers her conversation with Rafe and fills Silas in. So, this week fans will finally learn who is really responsible for Patrick and Sabrina’s accident, some popular theories are that it may have been Ava Jerome, Fake Luke, or Victor Cassadine.

General Hospital spoilers also have revealed that Nathan West will catch Levi red-handed on his wedding day to Maxi, with the stolen Aztec necklace in his pocket. In the promo Nathan calls Levi out and says “Everything about you is an act! Who are you?” And, Levi pulls a gun on Nathan!

So GH fans, do you think this will be the week that Billy Miller makes his first appearance as Jason Morgan? Who do you think ordered Rafe to run Patrick and Sabrina off the road? Check out the promo and let us know what you think in the comments below. And, don’t forget to check CDL tomorrow for more General Hospital spoilers.

What do fans at Soap Opera Spy have to say about this action-packed spoiler?

even in a tux levi still looks like a fool!!!

I do hope Maxi or Mac catches him with the gun pointed at Nathan…and I do hope the wedding doesn’t go forward.

It’s Victor who ordered Rafe to run them off the road.

Still looks stupid. I hope he gets shot with that gun in his hand. He Better not hurt Nathan.

I hope its BM! Miss seeing him everyday!

Will it be Billy Miller??

Fans really don’t seem like Mr. Dunkleman. But obviously everyone is ready to see the new Jason Morgan who is supposedly played by Billy Miller!