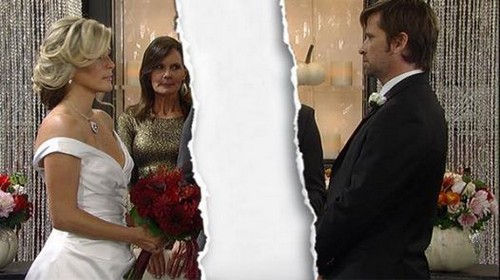 General Hospital spoilers tease that the week of November 3 will be packed full of exciting drama and shocking reveals, rumor has it GH fans will not want to miss a single episode. Franco (Roger Howarth) and Carly’s wedding from hell continues, meanwhile across town Franco’s BFF Nina is carrying out a dark and sinister plan of her own.

Monday November 3: According to General Hospital spoilers for Monday November 3, shots will be fired on the GH soap and more than one character’s life will hang in the balance. Meanwhile, Anna Devane continues to search for AJ Quartmeraine’s killer, and interrogates her own boyfriend Duke and demands to know if he was really with Sonny the night that AJ was shot and killed. Spoilers also reveal that on November 3, Liz and Obrecht face off over Jake/Jason Morgan (Billy Miller) and rumor has it Liz invites him to stay with her until he gets back on his feet.

Tuesday November 4: Nina Clay (Michelle Stafford) is determined to induce Ava Jerome and send her in to early labor so that she can steal her baby. Nina thinks Ava owes her a baby since she already had Kiki with Nina’s husband (great logic). According to General Hospital spoilers – on November 4 Ava’s baby’s life is in grave danger and there is a chance it may not survive.

Wednesday November 5: General Hospital spoilers reveal that Ava (Maura West) shares a shocking secret with her captor Nina Clay on November 5. General Hospital rumors have been floating around the internet that Kiki might actually be Silas and Nina Clay’s daughter, and Nina may have given birth to her when she was in a coma and somehow Ava ended up with the baby. If that rumor is true – then that is most likely the “shocking secret” that Ava shares with Nina, in a desperate attempt to get her to leave Ava’s new baby alone.

Thursday November 6: On November 6 GH fans can expect an intense confrontation between Ava Jerome and Sonny Corinthos (Maurice Benard), it’s been weeks since Ava ran away from the mobster – so there are sure to be some fireworks. Meanwhile, across town paranoid Duke realizes that he has been caught in a lie and Anna discovers his alibi was fake.

Friday November 7: General Hospital spoilers tease that on November 7 Michael confronts Sonny and demands answers about AJ’s death. Meanwhile, Anna Devane makes a bold decision – and rumor has it that bold decision is to arrest Sonny Corinthos and charge him with AJ Quartermaine’s murder. Of course other rumors floating around indicate the Sonny is shot by Michael for murdering AJ. Of course we address this critical issue in more detail as the week progresses.

So GH fans, what do you think will happen to Ava Jerome? Will Nina deliver her baby and steal it – or will Ava manage to weasel herself out of this predicament as well? Who gets shot on November 4? Do you think everyone in Port Charles will make it through the week alive? Does Anna arrest Sonny for AJ’s death? Let us know what you think in the comments below and don’t forget to check CDL tomorrow for more General Hospital spoilers.