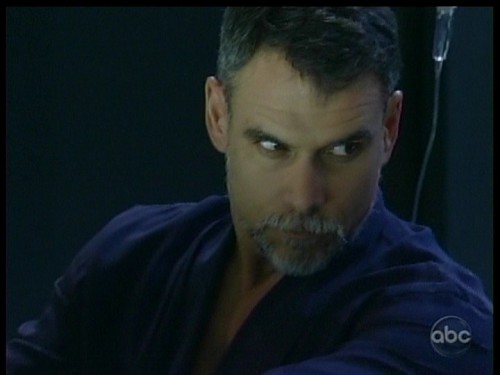 General Hospital spoilers teased that some classic Port Charles villains would be returning this fall, but no one was prepared for another round with the evil and certifiably insane Stavros Cassadine. Robert Kelker-Kelly made his big return as the recently thawed out Cassadine on Tuesday, September 9th. Victor Cassadine apparently wanted to give Stavros a “Welcome Home” present, so that is why he ordered Levi/Peter Harrell Jr. to kidnap both Maxie and Lulu. Stavros has been obsessed with Lulu for for years, and before he was put on ice, he kidnapped Lulu and froze her.

General Hospital spoilers reveal that Stavors Cassadine already has a sinister scheme cooked up for Lulu Spencer, on the September 9th episode of GH he revealed that when Lulu was frozen he took one of her eggs and fertilized it with his sperm. Now, he plans to impregnate Lulu with the fertilized egg and force her to have his child. Ironically, Lulu just had surgery done to make her able to carry another baby. Unfortunately, she planned on it being Dante’s baby, not Stavros Cassadine’s.

According to General Hospital spoilers from the September 9th episode of GH, there is some hope for Lulu and the rest of Victor Cassadine’s captives. Liesl Obrecht finally proved she didn’t have a heart made of ice and revealed to Anna, Britt, and Nikolas that Victor is holding everyone hostage at Crichton-Clark Clinic. So, it will be a race against time, and hopefully the troops will come to the rescue before Lulu is pregnant with Stavros Jr.

Do you think that Anna and the PCPD will be able to save Maxie, Dante, Lulu, and Nathan from Victor and Stavros? And what about Jason Morgan, if he was unfrozen as well-where is he? Share your thoughts and theories in the comments below and don’t forget to check CDL tomorrow for more General Hospital spoilers.