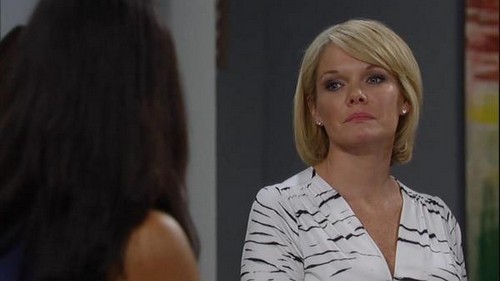 General Hospital spoilers tease that Sabrina Santiago is out for revenge, and determined to make Ava Jerome pay for killing her son Gabriel in a car crash. Little does Sabrina know, Ava actually isn’t responsible for the car crash, Victor Cassadine is. But, regardless, GH spoilers reveal that Sabrina is a changed woman and has a dark plan to avenge Gabriel and Carlos. On the September 10th episode of General Hospital, pregnant Ava Jerome doubled over in pain and Jordan rushed her to the hospital.

Sabrina Santiago is a nurse at General Hospital, and you can imagine her shock when Ava Jerome was rushed in and she had to help her. Although Sabrina told Ava she is “good hands” at the hospital, Sabrina has a huge opportunity to seek her revenge. Sabrina thinks that Ava killed her baby Gabriel, now she has a chance to take Ava’s baby from her and even the score. But, will Sabrina go that far?

General Hospital spoilers tease that Sabrina’s revenge scheme takes a dark turn, so there is a chance that she could decide to hurt Ava’s baby. As a nurse at the hospital it wouldn’t be that difficult for Sabrina to administer her medication that would harm the unborn Corinthos baby. Then again, Rosalee and Nina Clay are also on a mission to seek revenge on pregnant Ava, and laid up in a hospital bed makes her a sitting duck.

What do you think, General Hospital fans? How far will Sabrina go to seek revenge on Ava Jerome? Do you think she is cold hearted enough to hurt Ava’s unborn baby? After all, Sabrina did snap after Gabriel passed away, so anything is possible. Let us know what you think in the comments below and don’t forget to check CDL tomorrow for more General Hospital spoilers.