General Hospital Spoilers: Alexis Asks Ex-Fiance Ned Out On A Date – Will Julian and Olivia Freak Out? 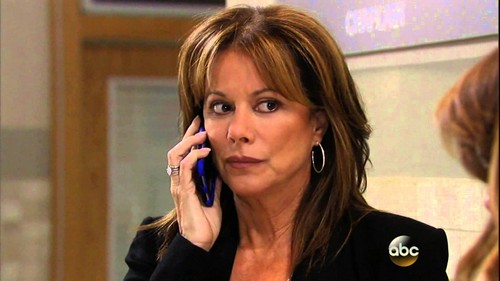 General Hospital spoilers have teased for a while now a potential relationship developing between Ned and Olivia Falconeri. With Olivia fresh off her split with Sonny Corinthos, she began spending time with Ned while he helped her through her break-up woes and made sure she didn’t do any drunk dialing while she was drinking away her sorrows. GH fans really responded positively to the connection forming between Ned and Olivia, but according to GH spoilers Olivia isn’t the only woman in Port Charles who has their eyes on Ned.

General Hospital spoilers in the September 15th edition of Soap Opera Digest reveal that Ned is apparently a hot commodity in Port Charles, and Alexis asks him out on a date. Alexis recently dumped Julian Jerome, again, because of his ties to the mob and the explosion at her house. Not only did he lie to her about being rid of boss Fake Luke, but her entire family was nearly killed in an explosion because of it. Her daughters have made it very clear that under no circumstances can Alexis take Julian back after the Fake Luke and Mickey Diamond set off a bomb at her cabin.

So, apparently Alexis has decided that the best way to get over Julian Jerome, is to go out on a date with her ex-fiance Ned. Soap Opera Digest teases, “This week Alexis takes a new approach in her ongoing effort to keep herself from falling back in to Julian Jerome’s arms by making a date with her former fiancé Ned.” Despite Julian’s mob mentality, he has a soft spot when it comes to Alexis, it will be interesting to see how he responds when he learns the love of his life is dating her ex-fiance.

Do you think anything will happen between Ned and Alexis? Will Julian Jerome freak out when he learns that Alexis is going out with another man? Who would you rather see Alexis with, Julian or Ned? Let us know what you think in the comments below and don’t forget to check CDL tomorrow for more General Hospital spoilers.