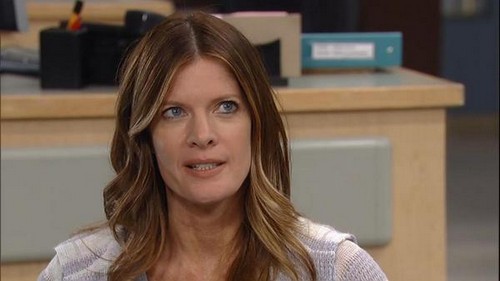 General Hospital spoilers for the week of September 8-12 tease a week of insane drama on the ABC soap opera. GH fans recently learned that Levi Dunkleman’s boss was none other than Victor Cassadine, and the villain arrived at the cabin where Lulu and Maxie were being held captive just in time to botch Dante and Nathan’s rescue mission. According to General Hospital spoilers for the week of September 8, Lulu wakes up and finds herself dazed and confused in shackles, and then realizes that her hubby Dante is tied up next to her and the chanced of someone else coming to save her are dismal.

General Hospital spoilers tease that while Victor’s victims are hidden away, he will be busy on a mission to discover the truth about Nathan’s paternity. And by the end of the week Victor will receive shocking news from Nathan’s mother, Liesl Obrecht. GH fans have speculated for weeks that Nathan might be Victor Cassadine’s son, and it looks like that theory will finally come to fruition. General Hospital spoilers also reveal that Lulu and Dante will get the shock of a lifetime when Victor Cassadine’s partner in crime reveals his identity, and it is someone Lulu thought would never be back to bother her again.

Aside from Victor Cassadine’s kidnapping plot, GH spoilers reveal there will be tons of other drama going down in Port Charles. During the week of September 8th Sabrina will begin plotting her revenge on Ava Jerome, the woman she believes caused the death of her newborn son Gabriel. Ava Jerome has bigger problems though, like Sonny Corinthos breathing down her neck, Nina Clay investing her and planning vengeance, and Jordan pressing her for information on her mob boss.

So, GH fans, who do you think the mastermind is behind Lulu’s kidnapping? Is it the recently thawed out Stavros Cassadine or another member of the Cassadine clan? How do you think Victor will react when he learns that Nathan West could be his son? Let us know what you think in the comments below and don’t forget to check CDL tomorrow for more GH spoilers.