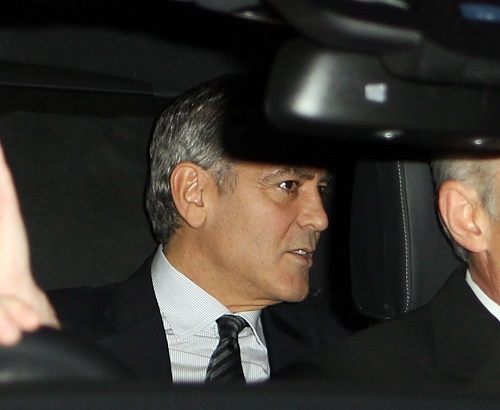 The Cloonmeister General of Hollywood, a.k.a. George Clooney, has revealed in an extensive interview with Deadline that he firmly believes that Hollywood is a backstabbing, conniving piece of work that has left Sony out to dry. Ok, he didn’t exactly say it like that. He did say that he and his agent sent around a petition backing Sony and Amy Pascal to Hollywood’s leading executives and producers after the leaked emails, and not one soul signed the document.

George Clooney revealed the contents of the petition to be fairly simple, explaining, “All that it is basically saying is, we’re not going to give in to a ransom. As we watched one group be completely vilified, nobody stood up. Nobody took that stand.”

And you know, the Cloonmeister isn’t stupid – he knows why nobody was willing to take that risk. As he himself explained to Deadline, “You embarrass them first, so that no one gets on your side. After the Obama joke, no one was going to get on the side of Amy, and so suddenly, everyone ran for the hills. Having said that, it was used as a weapon of fear…they know what they themselves have written in their emails, and they’re afraid.”

Hollywood is a town filled with scared, nervous, egotistical people right now, and they’d rather campaign for their Oscars and their Golden Globes than take a stand against North Korea. They know very well that their emails are filled with just as many horrible things as the Sony executives, and honestly, they just don’t want to get their asses handed to them. Amy Pascal – and really, many other honchos at Sony, are fighting for their jobs right now, and nobody wants to be in that spotlight.

Still, George Clooney is right. Sony was unwittingly backed into a corner by cancelling The Interview, and even though they didn’t really have much of a choice, they’ve set a horrible precedent with this. Now, every time someone doesn’t agree with the political content of a movie, all they have to do is hack into the company’s servers and threaten to bomb theaters, and they’ll get the film cancelled. Again, George ends with the perfect statement: “We cannot be told we can’t see something by Kim Jong-un, of all f*cking people.”

Ain’t that the truth.