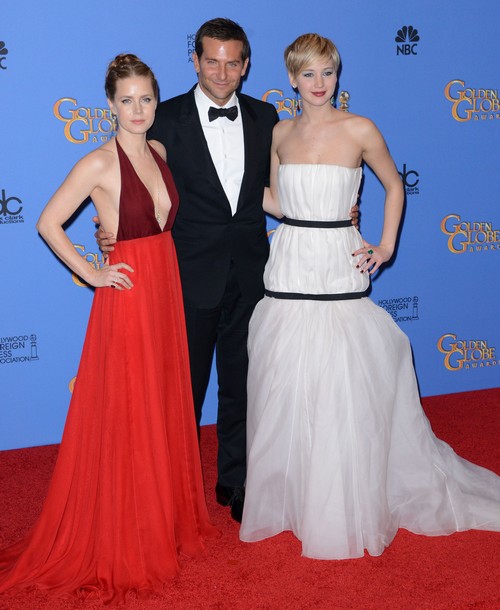 Jennifer Lawrence and Amy Adams were reportedly paid less than their male co-stars in American Hustle, according to the leaked Sony emails. Ok, first of all, those leaked Sony emails are continuing to be a gold mine of information, particularly for those gossip-inclined. Secondly, this just proves the rampant and prevalent misogyny that STILL dominates Hollywood, even though it’s 2014 and this shouldn’t even be a discussion anymore. Second of all , Amy Adams, Jeremy Renner and Robert De Niro were the outstanding actors in the movie! Bradley Cooper was a ham as usual.

Naughty Gossip reports that both Jennifer Lawrence and Amy Adams [her female co-star in American Hustle] only got 7 points in their overall deals, whereas Christian Bale, Jeremy Renner, and Bradley Cooper all got 9 points – and this is despite the fact that American Hustle was greenlit after The Hunger Games, which means that Jennifer was far and away the biggest name in the cast. In fact, several surveys conducted during the time of the movie’s release confirmed that, with audience members all choosing either Christian Bale or Jennifer Lawrence as their reason for seeing the film.

Everyone involved in the situation admitted that it was ‘unfair’ that Jennifer wasn’t getting as much as the men, and you can’t even use her screentime as an excuse – she had a supporting part, sure, but so did Jeremy Renner! And in that same way, Amy Adams was ostensibly one of the three leads in the movie, and she gets less than Christian Bale and Bradley Cooper? Ugh!

Well, the one good thing these emails are doing is constantly exposing the dirty underbelly of Hollywood. I don’t love that sexism still has its place in Hollywood, but at least these people have to own it up to it now. Jennifer Lawrence should be given top billing for all of her movies, and she would be given equal pay to the men that have the same kind of roles as her. It’s not fair that she’s still treated as second-billed star when it comes to finances, but used as a first-billed star when it comes to promotion.