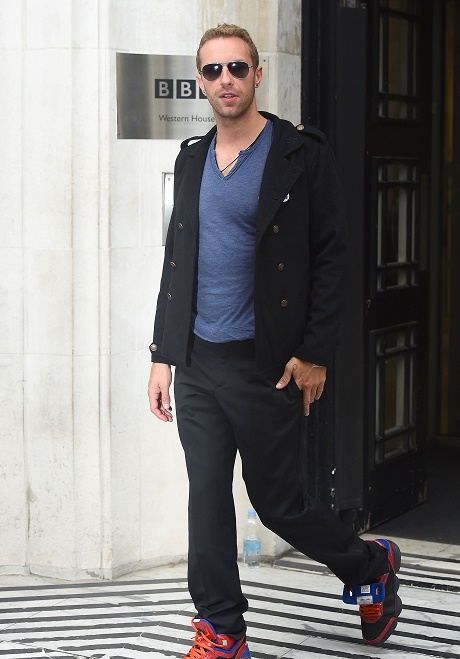 Chris Martin and Jennifer Lawrence haven’t even been going out for a full two months, but sources close to Chris say that he could be getting ready to dump J.Law already. Apparently, the nude photo scandal became too much for him, and he’s having second thoughts about dating someone as young and seemingly immature as Jennifer.

I mean, the dude’s got two kids, is in his late 30s, and is still very close to his ex-wife, Gwyneth Paltrow. Gwyneth is dating a respectable Hollywood businessman, and Chris is dating a 24-year-old girl who just had several nude pictures leak to the public. Putting aside the fact that Gwyneth probably doesn’t want her kids around Jennifer nor getting influenced by her, there’s also the fact that the fallout has now reached Chris as well.

First of all, sources close to the hacking scandal have been saying that the hackers have a treasure trove of private information concerning Jennifer, including pertinent bits about Chris. If that information leaks, it could damage Chris’ career and his relationship with his family. Is he willing to risk that just to hook up with J.Law?

Yes, it’s not her fault that her nude photos got hacked, and yes, the hackers are completely to blame for this incredible invasion of privacy. But at the same time, can you imagine Gwyneth taking nude photos and those pictures getting leaked? If she somehow did take such photos, you know she would probably hire a private bank to guard them with their lives.

In the end, it’s probably a combination of embarrassment, humiliation, concern, and pressure from his ex-wife that’s been causing Chris to have second thoughts about his relationship with Jennifer. Whether all of that will win out over his feelings for her, it remains to be seen.

What do you guys think? Will Chris dump Jennifer, or will he stick by her? Let us know your thoughts in the comments below.