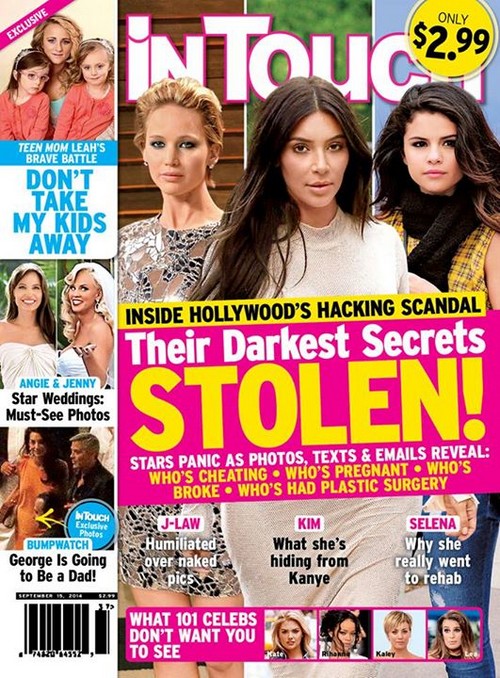 When details of Jennifer Lawrence’s nude photo cell phone hack and the  grand scale of the celebrity phone hacking scandal hit the Internet this week it seemed like the first and only thing that everyone thought about was naked photos, right? I mean these things very rarely stay totally under wraps and by now celebs such as Jennifer Lawrence really do know better. They just for some reason think that their nude photos won’t leak even when all of their friends and colleagues end up embroiled in a scandal.

According to the Sept. 15th print edition of In Touch Weekly there is actually much more at stake then embarrassing selfies. Jennifer Lawrence, Selena Gomez and Kim Kardashian all have their fingers crossed that emails and texts that they have sent aren’t also released online. Jen is kind of a mystery but she went through a bust up with Nicholas Hoult in the last several months so god only knows what has fallen from her fingertips while texting. Kim Kardashian doesn’t mind exposing her body but this woman has serious secrets. You know she keeps stuff from Kanye West and imagine if those nuggets were leaked thanks to hackers!

Selena Gomez was shuffled off to rehab back in January for a variety of white washed reasons but according to In Touch Weekly her real problems have been discussed in detail with friends and now those convos are fair game for hackers to share with the general public. While many of us would like to know what’s really wrong with Selena, the whole world finding out would likely send her into an even deeper downward spiral.

Someone not spiraling out of control is George Clooney who is set to marry Amal Alamuddin very soon. There have been rumors about the possibility of her being pregnant thanks to recent photos. Is George’s wedding the result of falling madly in love or is it because his current squeeze is pregnant? In Touch has the scoop so grab yourself a copy. In the meantime, what do you think is more destructive to the likes of Jennifer Lawrence- having nude photos leaked or having her darkest secrets made fair game for the press? Tell us your thoughts in the comments below!