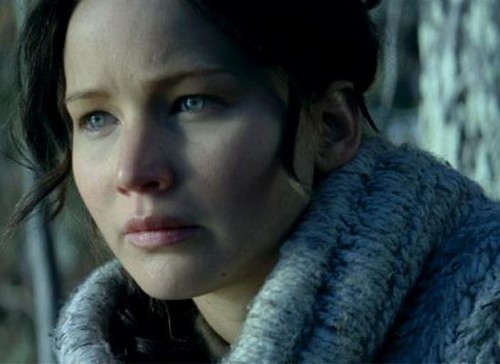 OHMIGOD OHMIGOD OHMIGOD. As a massive fan of the Hunger Games franchise, I have been waiting on tentorhooks for the Comic-Con Catching Fire trailer to come online. And boy, it did not disappoint.

The trailer starts off very similar to the previous teaser trailer, showing us bits of the Victory tour and the aftermath of the first film. We catch glimpses of the rebellion, and President Snow threatening Katniss Everdeen with the lives of her family. We also start to see the infamous love triangle between Katniss, Peeta, and Gale forming, with a kiss between Katniss and Gale.

But midway through the trailer, it completely changes gears. Although many fans thought that Lionsgate would keep the major twist from the books under wraps, much like they kept the games hidden while promoting the first film, they went right ahead and revealed it. The Quarter Quell, otherwise known as the 75th Annual Hunger Games, will take place with the existing pool of victors. Considering that District 12 only has three victors, Katniss and Peeta are reaped right back in for another fight for their lives.

From there on out, we catch small glimpses of the other tributes, including a fanged Enoboria, Sam Claflin as a shirtless Finnick Odair [sure to have the girls swooning], and Jena Malone as Johanna Mason. As Woody Harrelson says in his best Haymitch voice, ‘These are all killers’, and the job of staying alive during these games will doubly difficult.

The special effects also look vastly improved, and Katniss’ fire dress in this one doesn’t look as CG as it did in the first film. But beyond the special effects, the star of this trailer is Jennifer Lawrence. That girl can emote like nobody’s business, and man, she will make you cry. There’s one scene in the trailer where Katniss and Peeta are getting reaped again, and everybody around them knows [or thinks] it’s an assured death sentence this time. The look Jennifer exchanges with Elizabeth Banks [who plays Effie Trinket] will break your heart.

So fans, what do you think of the Catching Fire trailer? Excited, scared, happy, angry? Let us know your thoughts in the comments.