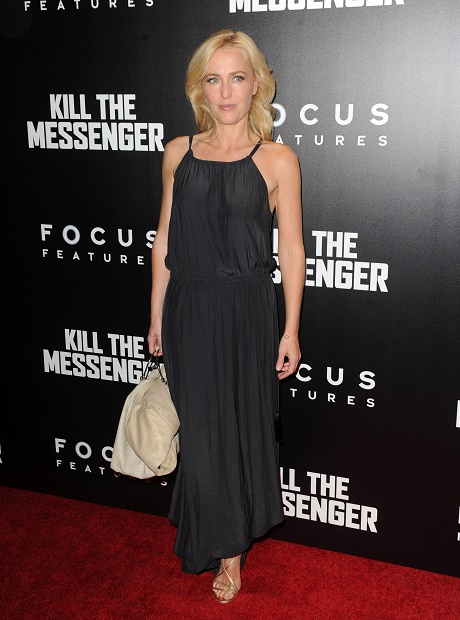 Gillian Anderson is once again teasing a third X-Files film, which would reunite her and David Duchovny on the big screen for the third time. Gillian was a participant on a Reddit AMA, and in addition to talking about the Ghostbusters reboot with an all-female cast, she also touched upon the plan for a third X-Files movie.

When asked about the progress made in getting the third X-Files movie to the big screen, Gillian replied, “Uh….uh… uh… Sorta kinda. Keep your ears to the ground.”

In other words, she and David are probably interested in coming back to the franchise but the studio is trying to find a writer and director for the film. This is a franchise that’s very near and dear to fans, and I don’t think the cast OR the fans will be happy with a shoddy script and a mediocre story.

They’ll want to make sure the producers get every detail right, and that usually takes time. Plus, Gillian Anderson’s schedule is so ridiculously packed, I don’t even know how she has time to do anything, much less film an entire movie right now. She’s headlining three shows, guest starring in several others, and has a few movies coming out. Of course, a potential X-Files 3 would be one of the highest profile roles on her roster, but that’s not to belittle anything else she has going on. Wouldn’t it be fantastic if she managed to land the female lead of the Ghostbusters reboot and film the third X-Files movie at the same time?

Plus, filming a third X-Files movie will allow her to spend more time with rumored boyfriend David Duchovny, especially without drawing any suspicion. The two have reportedly been dating undercover for the past year, and so far, they’ve managed to keep it under wraps from the media and fans. If they do film a third X-Files movie, they’ll be able to spend time together without raising doubts about the status of their relationship.