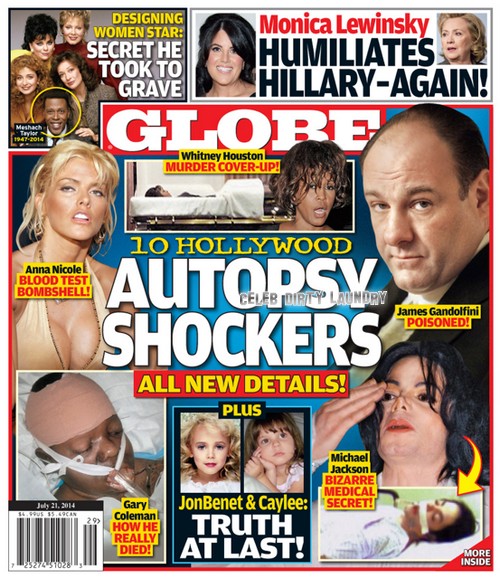 It’s kind of amazing how when a celebrity dies an early death, even after the official cause has been released people still look for other possibilities. It probably happens because people like Whitney Houston and Michael Jackson leave behind huge estates and there seems to always be someone off to the side angling for some fast cash, right? People will go to amazing lengths for a payday, even commit murder. The July 21st print edition of GLOBE Magazine is taking deep look at Ten Hollywood Autopsy shockers that perhaps should cause people to rethink what they have already been told about the death of some of the biggest names around.

The world was shocked at least momentarily to learn of Whitney Houston’s passing in 2012. She was found dead in a hotel bathtub and while officials claimed that her cause of death was drowning they left out the amount of drugs actually found in her system. Also, according to law enforcement Houston’s purse initially contained numerous prescription pill bottles but they were removed before her purse was tagged as evidence.

When Gary Coleman of Different Strokes fame took a tragic tumble down the stairs back in 2010 he lived for two days on life support before his common-law-wife Shannon Price decided to unplug him. The couple had married years earlier, then divorced but continued living together as a legit couple. The actor died of a brain hemorrhage and it has been long suspected that Gary’s tumble was helped by a nice shove from Shannon to get his cash.

Anna Nicole Smith’s death was hardly a shock. I think we all watched her float through the last years of her life seeming totally dissociated from reality. She was one of those people who could pull herself together briefly but never maintain it. Even after having a second child, Danilynn, Anna Nicole tumbled back into heavy duty addiction. She watched her son Daniel die of an overdose a few months before her own demise and it seemed to zap her will to live. What was found in her autopsy report?

What about Soprano’s star James Gandolfini? GLOBE reveals the truth about the story that ‘Tony Soprano’ was poisoned.

This week’s issue also discusses how Monica Lewinsky has humiliated Hillary Clinton once again. We also learn how Meshach Taylor took secrets to the grave and GLOBE details what they were.

You’ll have to grab the July 21st print edition of GLOBE Magazine to find out all the details on these stories and more! This week’s GLOBE goes right to the heart of the biggest murders and shocking deaths of our time and exposes facts and inside reports never before revealed to the public. Once my work is finished for the day I’m marching right out to pick up my copy.