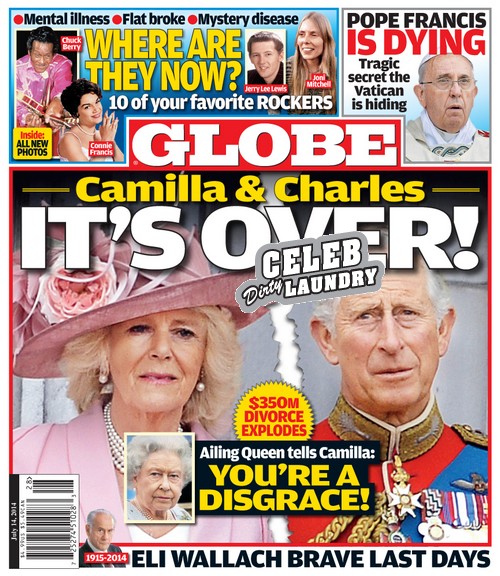 After nearly a year of teetering on the edge it seems that Camilla Parker-Bowles marriage to Prince Charles has finally gone over the cliff. She has invested an enormous amount of time in trying to either scheme or bully her way onto the throne and now it is extremely apparent that Camilla’s efforts have completely failed. Last fall she tried to force the royal family into a $350 million divorce pay out to buy her silence, a notion that was laughed at by Queen Elizabeth who has no intention of paying Camilla a dime. In fact, according to the July 14th print edition of GLOBE Magazine Camilla and Charles are indeed barreling towards divorce and Elizabeth isn’t about to buckle to the duchess’ demands. Instead she has declared Charles’ wife a disgrace and wants her gone.

Camilla isn’t likely to go without a fight though. This chick has always been in it either for the crown or for a nice payday and so expect her to dig in her heels on this one. She has also been at Charles’ side for over 3 decades so she certainly does have a lot of dirt on him. Do you think that eventually the royals will cave and pay her to keep her mouth shut?

GLOBE Magazine always likes to take a close look at the lives of some of Hollywood’s biggest stars and in the July 14th issue they are catching up with iconic rockers. Where are Jerry Lee Lewis, Connie Francis and Joni Mitchell as well as a bunch of others now? You’ll have to grab a copy to find out for yourself.

Sources are claiming that Pope Francis is dying and that the Vatican is trying to keep his illness under wraps. That’s not the only secret that GLOBE  is talking about this week. They also have a personal look at the final days of Eli Wallach and what he kept hidden until the very end.

As usual GLOBE is loaded with top investigative reporting and inside stories that you won’t find anywhere else so you’ll want to grab yourself a copy. The British royals are exposed in GLOBE as in no other news magazine – to learn the truth I read GLOBE every week so I can stay ahead of the curve. How ugly to you think that Charles and Camilla’s split will become? Tell us your thoughts in the comments below!