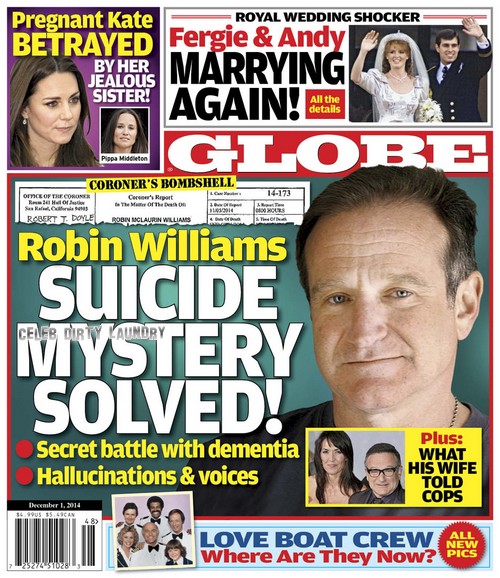 Robin Williams’s suicide and death earlier this year still haunts fans of the comedian and movie star. When someone passes away suddenly without any warning, and in such a tragic way, everyone wants answers. When a celebrity of Robin’s magnitude passes away, the facts become distorted and the truth becomes intertwined with rumors. Well, as always our friends at GLOBE Magazine go above and beyond to get the truth – regardless of how unglamorous it really is. And, if you want all the facts, not rumors, regarding Robin’s demise – then you will want to pick up this week’s edition of GLOBE.

The December 1st cover of GLOBE Magazine says “Robin Williams Suicide Mystery Solved! Secret Battle With Dementia, Hallucinations, And Voices.” The GLOBE cover also teases what Robin’s wife, Susan Schneider, told the cops when they arrived at the gruesome scene, and the coroner’s office’s bombshell autopsy report. If you are still baffled by the details surrounding Robin’s untimely death, and what aspects of his suicide are truth or just plain rumors, then you will definitely want to pick up this week’s GLOBE for all the hard-hitting facts.

GLOBE Magazine’s December 1 cover also teases some major Royal family news. Sarah Ferguson AKA Fergie and Prince Andrew are getting remarried after being divorced for nearly twenty years, and naturally GLOBE has all the inside details on their upcoming nuptials. The Duchess of York isn’t the only Royalty to make the GLOBE Magazine this week, the cover also teases a story on the growing feud between Kate Middleton and her sister Pippa.

So, are you as intrigued as we are to find out what really led up to Robin Williams’s suicide? What bombshell do you think was revealed in the coroner’s report? How do you feel about Fergie and Andy remarrying? Let us know what you think in the comments below and we’ll be picking up this week’s GLOBE as soon as it hits the newsstands so we can fill you in on the exciting feud between Kate Middleton and Pippa Middleton!