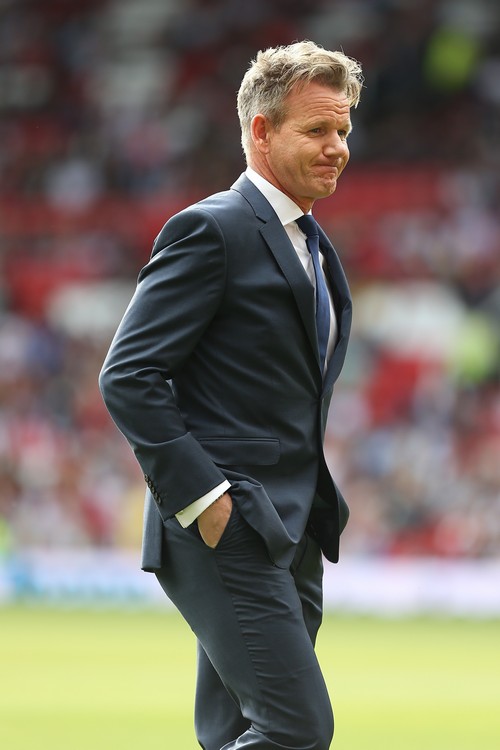 Gordon Ramsay of Hell’s Kitchen and Hotel Hell fame is in a LOT of trouble right now. According to reports, his business is over $50 million in debt, and he’s not making a single penny of profit – and actually, hasn’t been for a few years.  Karma comes back to bite you in the behind.

Now, Gordon literally makes his money telling other people how to run a business in the food industry. He claims he has the answers to creating a successful brand, and while he clearly knows to make someone famous, does that always translate into ‘success’? I guess it depends on how you’re defining success, but I don’t think anyone would choose fame and bankruptcy over no fame and monetary success.

According to Radar, Kavalake Holdings, the umbrella company for Gordon’s businesses, reportedly showed an operating loss of $9.2 million for the fiscal year ending in August, 2013. What’s even worse is that the company had over $50 million due in debt for that year, and only a teensy $7.4 million in cash. In layman’s terms, Gordon is screwed. What is he going to do, yell his way out of this one?

Finances are always a complicated matter, and I’m sure the people helping Gordon know what they’re doing. But on paper, failure seems imminent. Whether that actually comes to pass, we’ll just have to wait and see. And in the meantime, Gordon continues favoring nepotism, giving his daughter her own cooking show instead of focusing on finding new talent in the endless pool of wannabe chefs on TV. But hey, he’s already lost so much money, what’s a little more?

“This is an inaccurate interpretation of the public filings that were reported widely in the media back in May, and any claim that the company is anywhere near bankruptcy is ludicrous.  It is standard for the head of the company to deliver loans to expand the business and ensure experiences remain first class, and the Gordon Ramsay Group continues to deliver a strong performance, with growth year on year.”

Update Aug. 8 – TMZ reports that Chef Ramsay is being sued for $ 10 million by a ‘business partner’ over the ‘Fat Cow’ restuarant –  one thing I do know for sure – Gordon Ramsay is making the news and it all relates to financial matters. As we learn more we will report it right here for you at CDL>