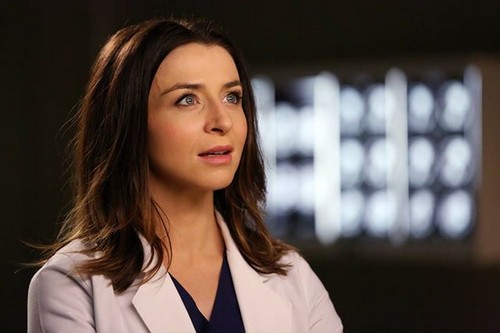 Tonight on ABC Grey’s Anatomy returns with a great all new Thursday November 20, season 11 episode 8 winter finale titled “Risk.” On tonight’s episode, Maggie and Meredith [Ellen Pompeo] join forces on a case, but their approach clashes with Derek’s. Elsewhere, one of the patients in the veterans project is pushed too far, and Callie [Sara Ramirez] blames herself; and a routine procedure leads to a heartbreaking diagnosis.

On the last episode, secrets about Amelia’s past addictions came to light and caused problems for her at the hospital; Bailey oversought Jo’s first solo surgery; and Arizona had to make an executive decision in Dr. Herman’s absence. Meanwhile, the doctors sprung into action when a couple arrived at the emergency room after escaping a fire. Did you watch the last episode? If you missed it, we have a full and detailed recap right here for you.

On tonight’s episode as per the ABC synopsis, “Maggie and Meredith disagree with Derek about the best way to approach a patient’s case, which leads to a bigger argument between the couple. Meanwhile, Callie feels responsible when one of her veterans is pushed too far and one doctor’s routine procedure results in a devastating diagnosis, on the winter finale.”

This episode looks like it is going to be a great episode and you won’t want to miss it, so be sure to tune in for our live coverage of ABC’s “Grey’s Anatomy” Season 11 episode 8 at 9 PM EST!

A simple root canal landed an unsuspecting woman in the hospital. The procedure caused an infection and unfortunately for her the infection spread to other parts of her body. So now she has to have surgery on her heart (which is where Maggie comes in) and on her brain (which is where Derrick comes in). However the patient can’t handle having both surgeries close together. Ultimately, she’s only going to have to go through with one of them and it’s her doctors that are going to have to figure out which.

But there’s a problem with that. Neither doctor wants to back down. They each feel their own surgery is more important than the other. Hence a third party was brought in to help. Maggie asked Meredith for her opinion and Meredith ended up siding with her over her husband. Something Derrick felt was completely unfair.

Half of the time, Owen essentially has to parent his doctors. Else they’d fight like the children or heaven forbid create even bigger problems without him. So he interfered in the Derrick/ Maggie fight. And not surprisingly, he managed to get nowhere with them.

He told Derrick to wait on the chest results and Derrick went behind his back to ask Richard to have a look at his patient. He told Richard he needed a second opinion but left out the part about him having already having one from Meredith.

And Derrick isn’t the only person bent on ignoring Owen’s advice. Owen had told Callie to take it easy on her patients. He felt the veterans in her clinic were being pushed too far and she had disagreed with him. She wanted her patients to feel out their own way. And one of them exerted himself too much and had an accident.

So Callie feels like her patient’s fall is her fault. If she had only warned him like Owen had asked then maybe he wouldn’t now be in a coma. Owen later took her to task for ignoring him. He told her just because the veterans were willing to push themselves didn’t mean she had to condone them.

Yet Callie isn’t the only one making mistakes. Her ex-wife has just as large of a mess. Arizona had gone behind Dr. Herman’s back to get her medical files. Not only was that unethical but she also broke someone else’s privacy. Herman has accepted her inevitable death and she didn’t care to get a second opinion. So why couldn’t Arizona just leave things as they were?

Arizona got Herman’s files and Amelia ended up finding out about it because of her. Amelia can’t really be of use but finding out someone else’s secret has put her in a vulnerable position. Amelia was almost fired last week. If the board were to find out she let a potentially dangerous doctor continue working then she most assuredly will not be given a second chance to stay on at the hospital.

And what makes both Amelia and Arizona’s situation worse is the fact Herman seems to be living up her last moments alive. She’s ignoring her diet and sleeping with one of her interns. Though Graham says Herman is open to trying new things and if she wanted to – Arizona should give the doctor a try.
Arizona didn’t want to sleep with Herman but she did need her opinion on a case. Stephanie had come to her with a funny looking ultrasound. She had to do April and Jackson’s checkup and their son has been sitting in the Buddha position for the last couple of weeks. And while that doesn’t sound scary – it did make Stephanie hesitate telling the parents.

So Herman looked at the ultrasound and she diagnosed the baby as having very frail bones. It looks like he has an extreme condition of it and babies born with his condition tend to die within days of their birth. April and Jackson’s firstborn isn’t going to survive. And Arizona has to figure out how to hell friends that.

As for Derrick and Maggie’s patient, Maggie went ahead with her surgery and the patient survived without suffering brain damage which was Derrick’s worst case scenario. Derrick was so sure he was right about the patient – he tried to steal the case away from Maggie. But she and Meredith fought him on that decision. And in spite of what he had predicted, their patient survived.

And there was a part of Derrick that was unhappy about being wrong. He feels useless being at the hospital and recently the president has sent someone in to convince him yet again to take the job in Washington. So it’s like Derrick has been given a second chance. He can take the job in Washington but the question is does he really want to go? Or is he simply too angry at Meredith to think straight?

Derrick and Meredith ended up having another fight. And after it, he accepted the position with the president.

See you in January!