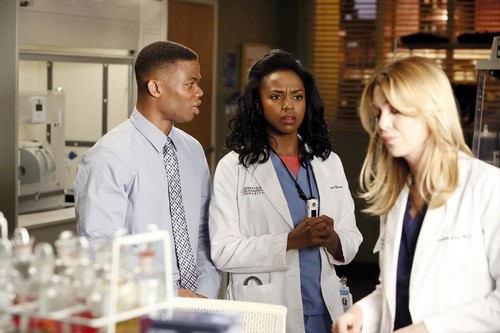 Tonight on ABC GREY’S ANATOMY returns with a great new episode. In “We Gotta Get Out of This Place” It’s Richard’s birthday and Bailey invites him to scrub in on the case of a lifetime. Meredith hires a research assistant to help with her portal vein project, and a scorned Callie gives Derek quite the shock. Meanwhile, Shane helps screen candidates for Cristina’s clinical trial and meets a young expectant mother (Keke Palmer) who needs his help.

On the last episode Arizona had a bad day which escalated when she advised one of Callie’s patients on a potential double amputation. Derek went back on a promise to Callie, and Jo and Stephanie came across an abandoned baby outside the hospital. Meanwhile, the doctors had to deal with the repercussions of the non-fraternization rule, which included meetings with HR and one doctor’s suspension.  Did you watch last week’s episode? If not we have a full recap of it for you right here.

Tonight’s episode looks like it is going to be a great episode and you won’t want to miss it, so be sure to tune in for our live coverage of ABC’s “Grey’s Anatomy”Season 10 episode 16 at 9 PM EST! While you wait for our recap hit the comments and let us know how excited you are about the season so far.

Aww its Richard’s birthday and everyone wants to congratulate him. But while some choose to see his birthday as a good thing; Owen decided to give Richard a package on retirement as a birthday gift. Was it meant to be a joke? Probably not because that’s the way Richard is choosing to see it.

He doesn’t feel like he’s too old to keep doing his job and where does Owen come off implying otherwise. Luckily for Richard ( and in a sense Owen) he still has Bailey in his corner. Bailey got a new case involving a man that appears to have absorbed his twin prior to birth. It’s a once in a lifetime kind of case and she’s giving it to Richard as a real birthday gift.

However there is one minor problem with it. It seems their patient doesn’t want to remove his tumor/ brother. He feels like it’s a “him” instead of just an “it”. And Richard didn’t make it any better when he talked about the twin being a once in a lifetime find. It only made the patient believe his Twin is like the Mona Lisa.

Poor Richard let his mouth ruin his gift and now he has the makings of the worst birthday ever!

But don’t expect his on and off paramour, Catherine Avery, to come to the rescue. It appears she has forgotten all about birthday because she’s too busy overstepping in her son’s life. Catherine isn’t happy about Jackson and April’s elopement and she wants her new daughter-in-law to sign a postnuptial agreement.

Jackson shut that down immediately. He doesn’t feel like his wife needs to be subjected to that although April is willing to sign the document. April doesn’t think the paper matters and she wants to hold out an olive branch towards Catherine. Because honestly how else is she going to make the other woman like her?

So April agrees to sign the form and instead of being grateful for her compliance; Mama Avery starts in with the questioning. She wants to know whether or not the couple plan to have children and what domination will they be raised in. April doesn’t understand where these questions are coming from but as Catherine goes on to explain – the Avery foundation, which gives out contributions on yearly basis to various hospital treatments, needs to know if its new board members will be raised to be pro-life and if so will these kids come to hate the actions of their grandmother and father.

It’s a lot of hypotheticals and yet it all boils down to the fact that Jackson and April should have thought out their marriage beforehand. That’s the problem Catherine has with the situation.

There’s been a lot of contention in the hospital recently. Take Callie and Derek for instance. Callie needs the sensors that both she and Derek built in order to finish her research so that’s why she suing him to gain access to them.

Owen tried to act a mediator between them and he failed. If it had been a simple a properties’ right issue then maybe he could have helped but this was more of an argument between friends.

Anyways it’s not like Owen doesn’t have his own problems. Everywhere he turns he runs into Cristina and her “suggestions”. She actually thinks setting him up with online dating will help fix whatever they are when even a blind man can see that Owen hasn’t gotten over her yet.

She either needs to take a step back or give her relationship with Owen another chance because the position she chose for herself now is just becoming blurry. What does she want from him?!?!

Though it’s a well-known fact that Cristina hates confrontation. Just look at her research project. These are important to all the doctors and still she handed over the big decisions to Shane. Why? Well, she didn’t want to get her hands down by vetting out potential case subjects herself. So she got Shane to do it and in doing so he met Cheryl.

Cheryl, a pregnant teenager, wanted them to perform the surgery on her heart so that she could stick around longer for her baby, but she didn’t meet any of the criteria. Shane felt bad for her and wanted to help. So when he couldn’t (because Cristina refused to budge despite meeting her), he had to learn to distance himself like Cristina does. Though he’s been down this route before and it didn’t end well for him.

Richard got his surgery back. He talked his patient into doing the surgery by promising the man he could keep what they remove or in other words the twin. Everyone watched from the observatory as he pulled a spinal cord, teeth and lung from out of his patient. What others view as plainly gross; these doctors see as a miracle.  And then at the end of it Richard tried to give it to his patient and the patient was surprisingly in the second group from earlier – he found it gross and asked them to take it away.

So Richard got to have a good birthday after all. Catherine even helped celebrate once she stopped hounding her son about grandchildren. And that only happened once April gave the Averys some alone time. April knew that her mother-in-law was still hurting from missing Jackson’s wedding so she left them to work it out on their own.

But something troubled her. Jackson told his mother that they don’t know how they’ll raise their children when April already knows how she wants them to be to raised. She wants them to have her faith and she’ thinking that they’ll eventually do a 4H program. While Jackson isn’t too sure about the rural program and he thought the kids would be going to boarding school. So maybe Catherine had a point regardless of the way she went about saying it.

As for Callie and Derek, they both showed up to Richard’s surprise party in good spirits. Derek finally spoke to the elite board he’s on and demanded they let Callie keep the sensors. It took some threats but it was worth it.

Sometimes a friendship can be preserved and sometimes it can’t. Owen needs to stop circling Cristina. At least she until she makes up her mind on what she wants because it might not be the answer Owen was hoping for.

The same goes for Alex. He wanted Jo to sign the love contract because it would allow them to date openly, but Jo believed paperwork was the death of a relationship. If she has cold feet at this point then she may never want to get married.

Even Meredith had her own problems. Sure it was just a pesky intern but where was everyone to help. Oh that’s right there were too busy to see she was doubting herself and taking it out on the staff…again!