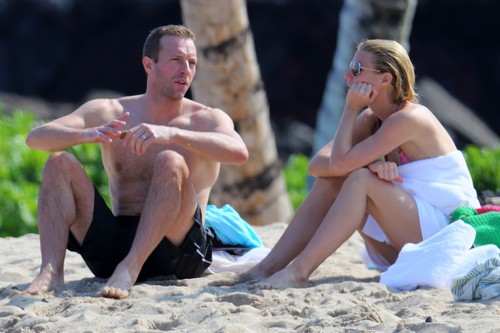 A few days after formally announcing her “uncoupling” (like railroad cars) on her obnoxious website GOOP, Gwyneth Paltrow finds herself and soon-to-be-ex husband, Chris Martin under a public microscope. By now we all realize that the writing has been on the wall for quite some time. There was Gwyneth being photographed kissing ex-boyfriend Donovan Leitch last September and Chris schmoozing a hot brunette at a party before finally leaving with her this past January. Clearly these two were living very separate lives and according to friends they had shared an open marriage for awhile now.

The thing is, that’s not how Chris necessarily wanted it. He is rumored to have been crushed by the way the marriage has ended up and the subsequent divorce – and ultimately it was Gwyneth’s behavior that did them in. Aside from thinking so highly of herself and taking herself too seriously she has had a real problem keeping her hands to herself. Over the years it has been widely believed that she cheated with an entertainment lawyer named Kevin Yorn and also had a dalliance with Elle MacPherson’s billionaire husband, Jeffrey Soffer. before they were married.

In the end Chris couldn’t handle the pile of rumors that swirled around his wife’s behavior and basically knew better than to trust her. When he saw the photos of her kissing Donovan last fall at a baseball game and realized that his kids were also there it was a game changer. Gwyn’s behavior was no longer on the down low, instead she was flaunting it in front of her children and Chris nearly pulled the plug on the marriage in a very public way immediately. Instead the two tried to find a delicate way to “uncouple” for the sake of the kids. Do you believe that Gwyneth was a serial cheater throughout her whole marriage to Chris? Tell us your thoughts in the comments below!