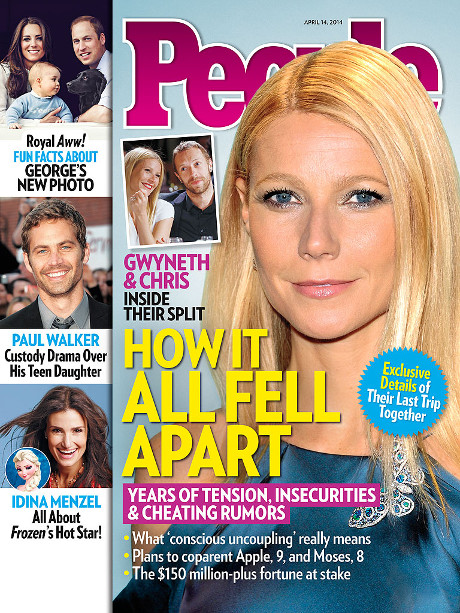 Gwyneth Paltrow and Chris Martin‘s split shocked us all last week but it seems the couple has been struggling to stay together for years. Close friends to the Hollywood power couple are revealing to People magazine secrets about the 10 -year troubled marriage. The marriage was doomed from the beginning and one insider delivered the biggest bombshell yet. The friend claims Gwyneth and Chris occasionally had an open marriage in order to attempt make their relationship work.

“They have been on and off for many years. The marriage was falling apart,” a source told People. “They were physically separated and emotionally,” added another. “Differences in personalities and trying to maintain successful careers also played a role in the break up. [Chris] is the kind of person who is always in a T-shirt. She’s much more glam,” another close friend said.

Chris is constantly recording or touring with his band Coldplay and Gwyneth does whatever it takes to ensure that she remains on the A-list instead of fading to the background like her mother, Blythe Danner. However, their busy careers tested the strength of their marriage.

“They seemed to have a pretty mature handle on that crazy rotation of being superstars and parents but that balance, given the time they had to spend apart, clearly couldn’t sustain itself,” a friend to both stars told the magazine.

I always knew there was something going on with this relationship. It always seem forced and too perfect. They were trying to play us all along. Even their breakup is becoming insufferable. What does “conscious uncoupling” even mean?

No wonder Gwyneth declared war on Vanity Fair and demanded that her friends not to talk with the magazine. She didn’t want the truth to come out about her cheating ways and failing marriage. Do you believe Chris and Gwyneth had an open marriage that was doomed from the start? Join the conversation and leave a comment.