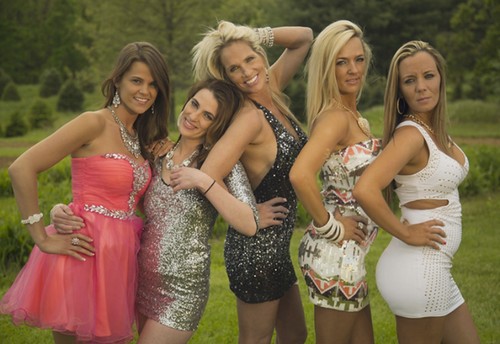 Tonight on TLC GYPSY SISTERS returns with an all new episode. On tonight’s show called, “Bourbon Street Brawls” a sightseeing tour of New Orleans includes haunted houses and a visit to a voodoo shop, but tempers flare when Mellie and Annie are ready to start drinking.

On the last episode, the morning after their explosive fight, Nettie aired out her feelings to a sympathetic Joann while Mellie shared her side with Kayla. Later, Mellie brought baby Richard to visit his dad; and Kayla revealed a shocking secret on the way to the horse races. Did you watch the last episode? We recapped it all right here for you.

On tonight’s show after a night out in the Big Easy, the girls spend another day sightseeing– complete with a haunted tour and a voodoo shop visit. But when Mellie and Annie decide to hit the bars early, emotions are heightened and Mellie’s temper is unleashed.

Tonight’s episode is going to be another drama packed one, which you won’t want to miss. So be sure to tune in for our live coverage of TLC′s Gypsy Sisters Season 3 episode 5 at 9PM EST! While you wait for our recap, hit the comments and let us know how excited you are about the new episode of Gypsy Sisters tonight.

RECAP: For Kayla and Mellie’s birthday, the older sisters pretty much ran the show by getting completely drunk that night. Them drinking and enjoying themselves was fine (everyone had a right to have fun) however it also left their younger sisters in the unique position of having to be their caretakers for once rather than you know the other way around. So of course the younger women were going to look for any excuse and/or opportunity to go back to their partying ways as quickly as possible. Because why not – they would have felt like they earned it after taking care of Kayla and Nettie all night long.

And while watching their sisters/mother figures get wild was astonishing – JoAnn’s surprise tour she sprang on everyone was hard to take in.

Now JoAnne knows that her family doesn’t like the superstitious stuff yet she booked a haunted tour for the ladies anyway. So Mellie and Annie had a few drinks beforehand. Funnily enough their plan was to make the tour more bearable by having some drinks and instead their drunk selves ended up ruining the tour for everyone. Including JoAnne who was really looking forward to the tour.

Mellie and Annie were wobbling and just generally being rude to the tour guide. Why would two adult women mock and bunny ear their tour guide? Like seriously! The cousins only left their sisters in peace when the final destination on the tour proved to be a haunted bar. Then when the tour was finish – Mellie kept on drinking until eventually she lost control of her temper. But the reason behind why she lost it is so stupid.

Mellie says she can handle her drinking and it obvious to everyone that she can’t!

In time Kayla and Nettie rejoined her (the voodoo shop was freaking them out) and they calmly talked to Mellie. They did this because they know that Mellie is often her worst enemy. So they made her come out of her self-pity party and told her to apologize to everyone for her actions. Though she ended up bursting into tears and so was unable to actual issue an apology.

Annie managed to forgive her and as for JoAnne – she finally decided to lose her temper right when things were calming down. JoAnne doesn’t want to forgive her sister because she feels like Mellie only picks on people she can. And seeing as Mellie knew better than to try and fight Nettie – JoAnne feels like her sister wanted to personally attack her.

Plus JoAnne hates that Nettie tends to “baby” Mellie. Getting drunk is not an excuse for what the other woman was going to do so a part of JoAnne feels abandoned by her sisters. One was going to fight her and the other told her to drop it even though she was truly upset by what happened. If Mellie could get sympathy then why couldn’t she.

But Nettie does treat them differently and she knows that. JoAnne will always be her sister yet she practically raised Mellie from birth hence she’s going to treat her like the daughter she’s come to be. Though she really does hate Mellie’s outburst as much as the next person. Nettie is not supposed to be stressed like the way she was – her Lupus can’t handle it. But try telling Mellie that.

By the next day all was well among the ladies and once Mellie properly apologized to JoAnne – they were willing to put the past behind them. And what do they do in order to continue to have some fun on this – they go on a river cruise to go see alligators.

And as it turns out Mellie doesn’t mix well with alcohol, her family, or alligators!