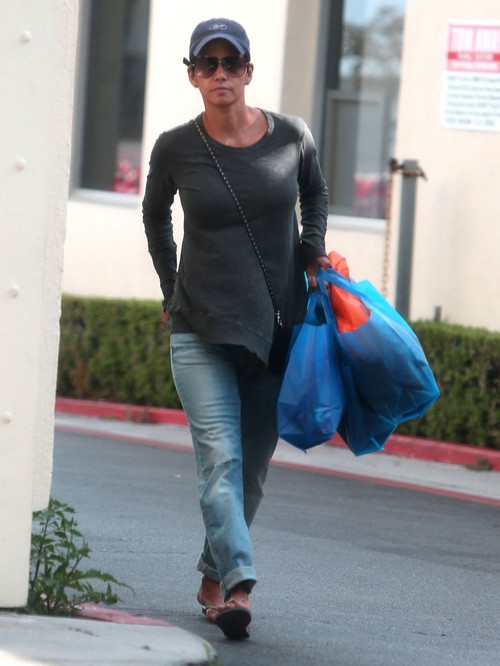 Halle Berry‘s one of those rare people that is SO good looking that you almost don’t even feel bad that she has a terrible love life. She’s already gone through a very difficult breakup with ex Gabriel Aubry, the father of her daughter, and now it’s rumored that she’s also facing difficulties in her relationship with Olivier Martinez.

Of course, the tabloids are forever tossing out rumors and hoping they stick, but this has been circulated enough times that there could be a ring of truth to it. Halle has been spotted out and about without her wedding ring a couple of times now, and she always tries her best to avoid questions about Olivier even though she’s more than happy to discuss her new baby boy, Maceo.

Take, for example, her new interview with Extra. She explained, “I just feel great because I have another baby. I never thought that at my stage in life another baby — and a baby boy — was coming to me, so yeah, I’m blessed.”

But then, when it came to Olivier, she just mentioned his new role on the show ‘Revenge’, and added, “I’m going to follow his little arc along. I’m very proud of him… I think he’s delicious.” Is it just me, or is that an odd thing to say about the man you recently married and just had a child with?

It always seems like celebrity couples are weathering a rough patch whenever they mention how ‘blessed’ they are. In this case, we’ll just have to wait and see if Halle’s just lying low about her marriage because of privacy concerns, or whether she and Olivier are actually taking a break from each other.