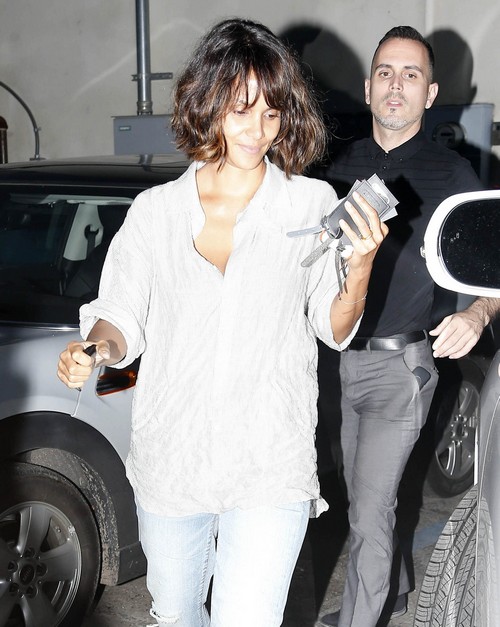 Halle Berry is on a constant mission to bury her ex, Gabriel Aubry, especially when it comes to their daughter, Nahla. For those of you who don’t know [lucky you], Halle Berry and Gabriel Aubry have been embroiled in a never-ending custody battle for the past few years, with both of them claiming that the other is an atrocious parent. Halle’s latest attempts to discredit Gabriel come in the form of hair alteration. I know what you’re thinking… huh?

Basically, Halle Berry submitted a hairbrush full of Nahla’s hair, trying to prove that Gabriel had been bleaching it to look blonde as opposed to biracial. The lab results did conclude in Halle’s favor, with the result being [via Page Six], “extensive damage … likely the cumulative affect of repeated exposure to numerous gentle bleaching treatments.”

The judge has ruled that neither Halle nor Gabriel is allowed to alter Nahla’s hair, but that brings us to the bigger question – why is Halle Berry being so hypocritical about this? Actually, we know why – so she can win this ridiculous battle against her ex. However, Halle herself straightens her hair, dyes it different colors, and wears wigs all the time, so how can she rail on her ex for doing the same thing to her daughter? Plus, Halle Berry is half-white herself, and while I can see her concern if she was purely worried about the bleaching effects on her daughter’s hair, she’s not – she’s bringing race into the equation, and she should hold herself to the same standard that she holds others, including any ex-boyfriends or ex-husbands.

What do you guys think? Is Halle Berry right to have gone to the court over her daughter’s hair? In the end, it’s only Nahla that will be affected by all this in the long run, and both Halle and Gabriel should realize that and end their incessant fighting.

Halle Berry wearing – wigs – not her own natural hair – by FameFlynet