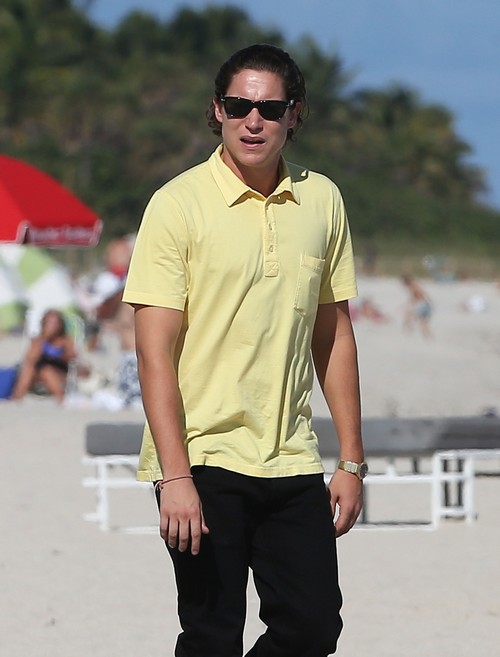 Is Vito Schnabel the go-to rebound guy for older Hollywood actresses who’ve just gotten out of a long-term relationships? Demi Moore was reportedly hooking up with Vito Schnabel at Art Basel last year, although he reportedly broke up with her soon after because the press was affecting his career as an art dealer.

However, it looks like he’s found a more stable celebrity companion this time around. According to Radar Online, Vito is currently seeing Heidi Klum. Apparently, Vito and Heidi were all over each other at LA’s famous Bootsy Bellows club over this past weekend, with a source explaining, “I guess being with a younger guy was making her act like she was in high school. She was kissing his face all over as they enjoyed drinks with friends. They hardly left the booth — they just sat next to each other, touching from the shoulder down, laughing and flirting and making out.”

Good for her, I guess? Vito doesn’t really seem like the most stable boyfriend to have, if he’s dated this many Hollywood starlets over the past few years. But hey, maybe Heidi’s just using him for sex, and I doubt that would bother him much. Vito’s also been linked to Liv Tyler and and Elle Macpherson, both tall and leggy. The guy clearly has a type, but if he’s not careful, he’ll be known more for his dating life than he will for his career – which is exactly what he was trying to avoid with Demi Moore last year.

What do you guys think? Will Vito and Heidi last past the month? And who do you think will Vito move on to next? Let us know your thoughts in the comments.