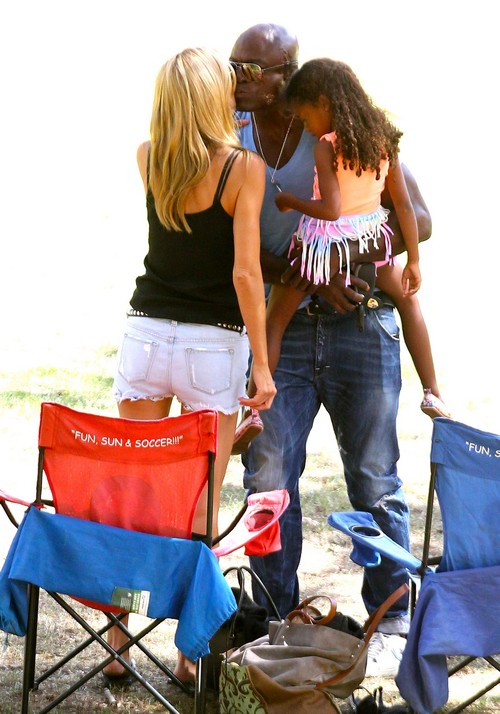 When Heidi Klum and Seal got married in Mexico in 2005, no one really expected the celebrity marriage to last. However, the unlikely pair actually raised four children together and their adorable family wormed their way into the media’s hearts. In 2012 we were all shocked when Seal and Heidi announced they were divorcing and going their separate ways. Although they should probably get an award for the friendliest exes ever, they both began dating new people.

Earlier this summer multiple sources claimed that Heidi and Seal were seen out together holding hands and kissing as if they had never divorced. And, it looks like there may be some truth to those rumors. On Saturday October 4th Heidi and Seal were photographed attending their children’s soccer games in Brentwood, California. This is reportedly the first time Seal and Heidi have attended a game together in a very, very long time, the supermodel usually brings whoever she is dating at the time with her. In the photos Heidi, Seal and the kids appear to be a picture perfect family. If we didn’t know any better, we wouldn’t even think they were divorced.

Considering the fact that Heidi and Seal have been seen holding hands and kissing, a real display of PDA, and taking the kids out for family outings together, it is very likely they are officially back together. According to our exclusive source, a parent of one of Seal and Heidi’s playmates, “Heidi and Seal are definitely back together.” The source went on to explain that the couple’s 9 year old Leni was just bragging the other day that her “daddy lives with them again.”

Do you think Heidi and Seal have officially reunited? Will they get married again? Or would you like to see them with other people? Let us know what you think in the comments below!

Update: After an affectionate afternoon at the soccer game the family went shopping and then went home together looking very reunited. Evidence points in the direction of a successful reconciliation!

Heidi Klum and her ex-husband Seal watching their kids Leni, Henry, Johan, and Lou play soccer in Brentwood, California on October 4, 2014. The amicable exes are rarely seen together at their kids’ soccer games, as Heidi usually brings along which ever person she is dating at the time. The former couple seemed to be getting along very well and the kids were happy daddy was there, taking turns to sit on his lap. Image Credit: FameFlynet

Heidi Klum and ex-husband Seal take their kids Leni, Henry and Lou out shopping at the Westside Pavillion Mall in Los Angeles, California on October 4, 2014. Afterwards the family stops by Whole Foods for some grocery shopping before heading home.