Heidi Klum And Seal Back Together After Series Of Hookups 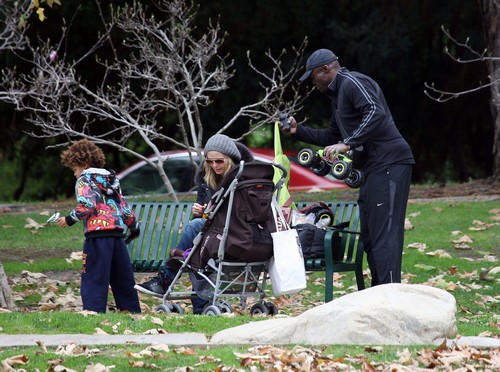 According to an exclusive from The Fix, Heidi Klum and Seal have reconciled after Heidi split up with her bodyguard boyfriend, Martin Kristen. Heidi and Seal broke up a while ago, and there seemed to be an overlap between her relationship with Seal and her relationship with Martin. However, there’s clearly no hard feelings between them.

Heidi and Martin broke up in late January, and it was only a few weeks later that Heidi and Seal were spotted together again. Apparently, the former couple started spending more time together with their children, which eventually led to sparks flying again.

A source explains, “Late last year, their daughter Lou was quite upset about not seeing her dad as much. In the end, the couple decided to co-parent a lot more, attending sports games together etc. Then in the last couple of weeks, that turned into long dinners at the house, longer stays with the kids and then sleep overs. They’re even kissing in front of the kids now. It’s very much back on.”

It’s actually surprising that Seal and Heidi were able to put everything behind them, especially considering their public spat following Seal’s comments about Heidi sleeping with the ‘help’. And cue Heidi breaking up with Martin not soon after. Apparently, Martin was about to propose to Heidi, but she broke up with him before Valentine’s Day because she knew she wasn’t willing to make that commitment. The source adds, “He was about to propose and she knew that the time was now to cut it off in order to not hurt his feelings and have anything drag out that would be unpleasant for him, for her, and for the kids.”

And you know why Heidi couldn’t take that next step with him? Apparently, it’s because she still had feelings for Seal. D’awww. It is heartwarming when former married couples get back together, regardless of the reasons for their split. I mean, if it makes their kids happy, it’s gotta be worth it, right? I don’t know if this reunion will last, but at least they can enjoy it while they can.