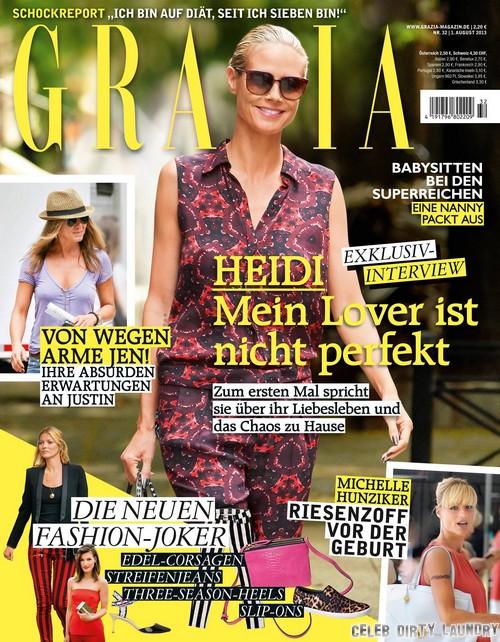 In a new issue of Grazia Germany, Heidi Klum reveals that her current boyfriend and lover, Martin Kristen, is not perfect in the sack.

Well, Heidi always used to give glowing praise to Seal when they were together, so we wonder why Martin is so underwhelming? Is it because he can’t let go of his bodyguard instincts, or because he’s scared of hurting Heidi – which to be fair, Heidi is incredibly skinny and looks like she could crack under the weight of another person, especially the size of Martin.

However, there are other signs that point to possible trouble in paradise between Heidi and Martin. In a new interview with Life & Style Magazine, Heidi revealed that she had a crush on Robin Thicke. She explained, “He’s a sexy guy with a beautiful voice. He knows how to dance and he’s very kind of sure of himself, which I like in a guy. He is such a humble guy.  He’s not bad to look at!”

Well, that’s certainly a lot of praise for someone who claims that she only has eyes for her boyfriend. Obviously, she used to say that with Seal too, but since there are rumors that Heidi cheated on Seal with Martin, it doesn’t look like that really holds true.

Is Heidi’s and Martin’s relationship nearing an end? It’s only inevitable, considering that Martin is, after all, her bodyguard. These kinds of relationships rarely last, even if half the couple is not a celebrity.

What do you guys think about the Grazia Germany report and Heidi’s comments about Robin Thicke? Should Martin be worried, or is it inconsequential? Let us know your thoughts in the comments.