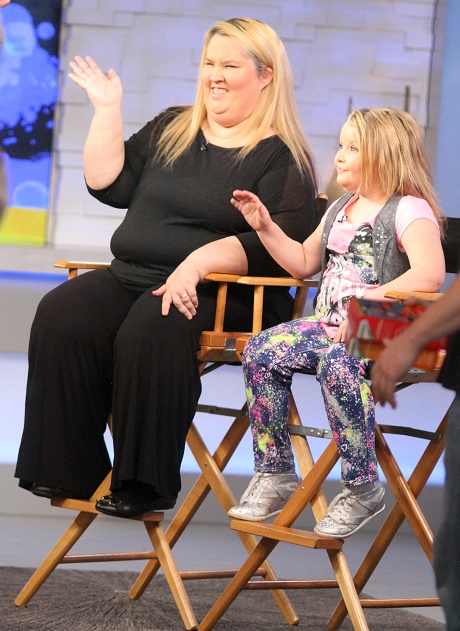 Here Comes Honey Boo Boo has officially been cancelled, according to TLC, in light of recent events surrounding Mama June Shannon allegedly dating registered sex offender Mark McDaniel. While everyone in the Boo Boo camp denies the allegation, including Mama June herself, TLC put its foot down and chose not to get entangled in this news any farther by axing future seasons of the docuseries — and even choosing not to air new, already produced episodes.

On her Facebook page this morning, Mama posted the news after receiving official word from TLC: “Just got a phone call this morning from TLC and as of right now there will be no more production of the show — the statement of me dating a sex offender is totally untrue. I would not ever, ever, ever, ever put my kids in danger, I love them too much.”

Mama added that TLC wanted them all to stay a bit quiet on the matters, but that was a memo TLC apparently didn’t receive, as they are being anything but secretive in their reasoning behind nixing the show: “TLC has canceled the series Here Comes Honey Boo Boo and ended all activities around the series, effective immediately.” The statement adds, “supporting the health and welfare of these remarkable children is our only priority.”

Despite a photo depicting her in bed with McDaniel, Mama June continues to say that her children are her number one priority and that she hasn’t rekindled her flame with her ex. Lauryn “Pumpkin” Shannon and Chickadee also denied the allegations, and Pumpkin went so far as to say the pic was photoshopped.

What do you make of this story? Do you think that Mama June is really dating this pedophile or do you think someone is targeting her? Leave us your thoughts in the comments section below.