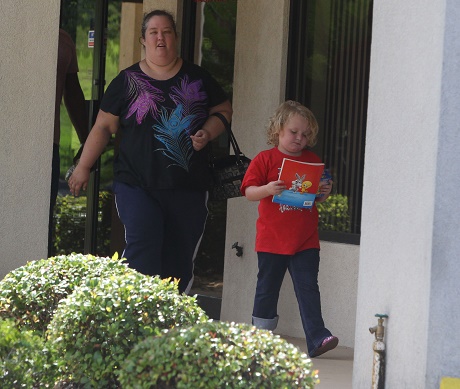 Mama June Shannon of Here Comes Honey Boo Boo has moved on from Sugar Bear and is reportedly dating Mark McDaniel, an ex-boyfriend and registered sex offender. This is a sick turn of events. Normally, dating an ex wouldn’t be so bad…she wouldn’t be the first to go back to an ex after a breakup. But the disturbing part in Mama June’s case is that her ex-boyfriend, sicko Mark McDaniel, 53, is a sex offender, convicted in 2004 for aggravated child molestation after he forced oral sex on an innocent 8-year-old child, reports TMZ.

Even more disturbing (if that is possible), the victim was a relative of Mama June’s who she still has contact with! The identity of the child was not disclosed but it was reported to be someone June has contact with.

After serving 10 years in prison (should have had a life sentence), demented McDaniel was released in March and is now a registered sex offender in the state of Georgia. Mama June has reportedly been seeing McDaniel for the past couple of months, sneaking away to spend time with him.

Recently, she was pictured next to him in a hotel bed, where apparently the couple was partying among friends. Mama June is not only being dangerously negligent and delusional, she is also spending money on this pig — buying him various gifts! TLC states they are not currently in production, but when contacted by TMZ, they said they would be looking into this and reassessing the future of the show.

Now it is time for Mama June to reassess her brain because this is just beyond sickening. Go ahead, CDLers, give it to Mama June on this one and share your comments below.