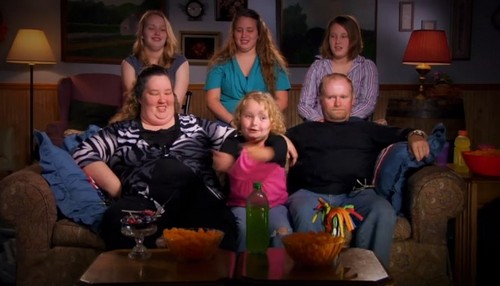 Tonight on TLC their popular and zany reality show HERE COMES HONEY BOO BOO continues with another new episode called, “You Need Your Thumb to Vacuum Clean.”  On tonight’s episode Kaitlyn’s first birthday presents Anna with a difficult decision about her daughter’s anatomy; Alana bonds with her mother when she feels like her niece gets all the attention.  Did you watch tonight’s first episode?  We did and we recapped it right here for you.

On last week’s episode the girls had developed potty mouths, so the family set up a swear jar. Meanwhile, Anna thought she wanted to go to culinary school, so her family dared her to make a chicken pot pie. Fortunately, Alana enjoyed handling raw chicken and was able to assist.

On tonight’s episode it’s Kaitlyn’s 1st Birthday! Anna is faced with the difficult decision of whether or not to have Kaitlyn’s third thumb removed. Alana has been feeling left out since Kaitlyn became the baby of the house, so June takes her out for some bonding time.

Tonight’s episode looks like it is going to be another crazy Thompson family episode and you won’t want to miss it, so be sure to tune in for our live coverage of TLC’s “You Need Your Thumb to Vacuum Clean” at 9:00 PM EST!

On tonight’s episode its Kaitlyn’s 1st birthday. Because of the special day the whole family has planned a large party with a bunch of games and activities. Mama June wanted to make sure there were enough games for the older children as well. And though the girls are enjoying themselves; they also want to point out that their 1st birthdays weren’t as grand as Kaitlyn’s. It’s not as if anyone made a big deal for them.

It seems some people are starting to feel a little bit jealous over how much attention Kaitlyn has been getting and that can go on to explain why Alan a couldn’t stop herself from blowing out the candles on Kaitlyn’s cake. Before the arrival of her niece, Alana was the baby of the family. So she’s still getting used to that.

Mama June did pick up Alana’s jealousy. It was pretty hard not to! So in order to make her baby feel special she took Alana out to a yogurt desert place. The mother knew her daughter need some quality time away from the baby.

But Alana is fortunate enough to stand out in other ways. For instance, unlike the rest of her family that has something wrong with them like a missing toe or having their heart on the wrong side of their chest – Alana was born without any overt abnormalities. Kaitlyn on the contrary was born with six fingers on one hand. Her mother, Anna, wants to solve that problem by removing the extra finger and would have already done so if there wasn’t a risk. If she allows the doctor to cut the sixth finger then it could paralyze her other thumb.

Yet Anna is seriously considering going through with the surgery, but Mama June doesn’t like it. She feels that decision should be left up to Kaitlyn. Once Kaitlyn becomes old enough then she could decide for herself. To teach her girls the consequences of such a surgery she taped down all of their thumbs so they could see what it’s like if Kaitlyn was to lose function. To say the girls struggled would be an understatement. No one generally gives disclaimer to their mother about a possible mess when they go to the bathroom.

Mama June wanted to show the girls how hard it was and they did get to learn this, but Anna simply won’t give up the idea of surgery. She’s worried that her daughter will suffer from kids picking on her later on and that maybe surgery would hurt less if it was done while Kaitlyn was still small.

The family had made an appointment with a pediatric surgeon. Both Anna and Mama June needed to hear how much of a risk the surgery holds and prior to their appointment the family needed to have fun first. They were able to bench all surgery talk in order to go out to the lake to beat the summer heat. The girls got to be able to relax and their parents appreciated living the house.

When it does come down to the day of the appointment everyone was nervous. What helped Mama June not to feel this way is the fact the doctor was very attractive. She called him Fabio with different hair and looked at him all gooey eyed during the appointment. The doctor explained the risks but he assured them that removing the finger would best while she’s still a baby. Kaitlyn is one of several cases this year with the same condition and he’s given the same advice to most of them. Neither Mama June nor Anna knew that Kaitlyn’s condition was so common. June joked it might have something to do with the water.

Anna has heard all she need to know now and has decided to hold off on surgery. She wants to go through with but feels that it would better if she were to wait a year before subjecting Kaitlyn to that. All Anna wants to do is be a good mother and just the idea of surgery scares her – that’s why she putting on hold.