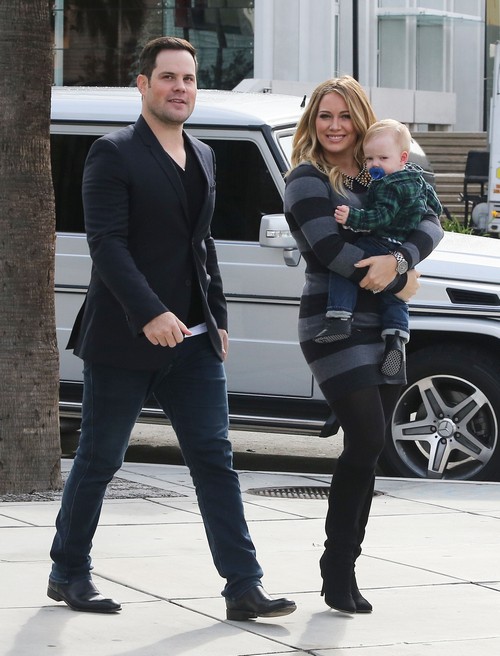 Despite what looked like the beginning of a wonderful year together, couple of three years duration Hilary Duff, 26, and Mike Comrie, 33, have separated. Surprising? Yes and no. We all know how many Hollywood couples bite the dust after a few good years together, but we had high hopes for Hilary and Mike, parents to Luca, who turns 2 in March. There were definite signs of turmoil as we reported here, although no obvious infidelity, and in pictures as recent as NYE 2013, the couple was putting on a solid front. Looks are deceiving, though, and divorce is imminent.

The couple, married in 2010, has attempted to keep the the public face of the split as amicable as possible, with Duff even tweeting to thank fans for the “kindness and well wishes” during what she described as “not an easy day” for them.  What a load of crap. Who tweets fans during a split that leaves a broken home?

In true Hollywood-form, E-News confirms the couple has assured their fans that they are committed to remaining “best friends” and will work together to co-parent their son Luca. Duff has described her soon-to-be ex-husband as a hands-on father. They both seem committed to keep things friendly, understanding they’ll be in one another’s lives for the long haul.

Comrie, 33, retired from the NFL after a hip injury, may have felt the pressure of being under his famous wife’s shadow as we’ve seen with other couples who include a famous beauty and ex-sports professional (Hello Jessica and Eric?). Perhaps Hilary’s determination to get her pre-baby body back gave her strength that went beyond her muscles and straight to her head. Though it seems that Huff initiated the split, she did give the marriage a good fight, attending couples therapy with Comrie and committing to regular dates nights when talking about her marriage in a 2012 interview with E News.

After years of weight battles, Hilary looked amazing and confident on December 31 as she latched on to Comrie all decked out as they said goodbye to 2013. They both in on this big secret and able to keep it from all of us as they posed and smiled like the happiest of couples. Sadly, we’ve been deceived and the happy couple will be just a memory soon. Hopefully they will keep things as friendly as they appear now (or as they would like their Twitter followers to believe) for the benefit of their adorable son. But let’s be serious here – when they married they hoped for a happy family life and now those hopes are forever dashed. Something serious changed with one or both members of the doomed couple – we will keep digging and let you know what we learn.