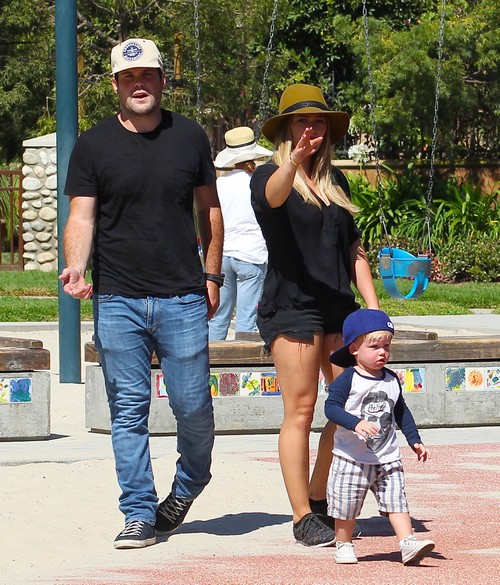 Job changes and a new baby can put a strain on anyone’s life but I can’t imagine having such huge life adjustments in my early 20’s. Hilary Duff seems like she been around forever doesn’t she? She has been a household favorite for nearly 15 years ever since popping up on the Disney Channel and it’s clear that Duff has cemented herself a place in Hollywood. With all the success I think we all figured that life at home with her husband, Mike Comrie was just fabulous but that’s not always so.

According to the Sept. 16th print edition of Star Magazine Duff and Comrie were teetering on the verge of a split last winter when they headed for couples therapy. Apparently they have been working out their issues since last February and it has all but saved their very young marriage. The two believe that they are meant to be together and decided that getting some help would help them patch up the issues and it really does seem to have helped.

I think it’s kind of nice to hear of a young couple admitting it’s not all rainbows and chirping birds and then doing something to make it better. Hilary has said that her son has strengthened her marriage and no doubt little Luca is part of what caused them to seek help rather than to first take time apart. Are you a fan of Hilary’s? Doesn’t she seem like a pretty normal mom and that comes with a whole bunch of very normal problems, don’t you think? Will Hilary and Mike’s marriage last? Tell us your thoughts in the comments below!