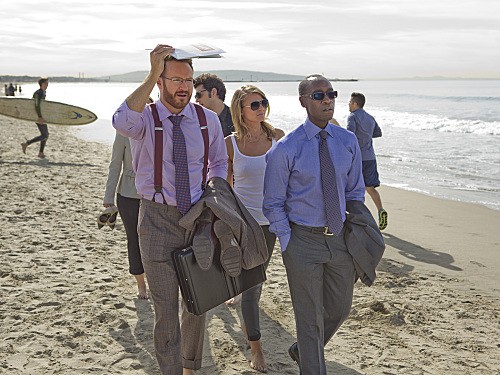 Tonight on Showtime HOUSE OF LIES continues with a new episode called, “Brinkmanship.”  If you have never watched the show it is about charming, fast talking Marty Kaan and his crack team of management consultants know how to play the corporate game better than anyone, by using every dirty trick in the book to woo powerful CEOs and close huge deals.

In the board rooms, barrooms and bedrooms of the power elite, corruption is business as usual and everyone’s out for themselves first. Nothing is sacred in this scathing, irreverent satire of corporate America today. Outrageous, subversive and wildly funny, HOUSE OF LIES stars Academy Award nominee Don Cheadle and Kristen Bell.

On tonight’s episode Marty and the team execute the plan to seize Marissa’s company from her siblings; Jeannie urges Marty to forgive Clyde; Doug and Sarah’s relationship is tested.

Tonight’s House of Lies Season 3 episode 8 is going to be exciting, and you won’t want to miss. So be sure to tune in for our live coverage of House of Lies— tonight at 10 PM EST! While you wait for our recap, hit the comments and let us know how excited you are about this season of The House of Lies.  Check out a sneak peek of tonight’s episode below!

The episode starts off with Marty and the pod walking on the beach with Clarissa (the outcast of the Mclintoch Media Group). Clyde, who is dating Clarissa, is confident that Clarissa’s ex-billionaire boyfriend Julian Zanino will help them wrestle the company away from Clarissa’s family. Clyde knows that this is his in with Kaan and Associates and to getting on Marty’s good side. While sitting on the beach with Zanino the group pitches the idea that he threaten to buy out the Mclintoch Group unless they give Clarissa back full control. Zanino agrees to this and the plan to get Clarissa as head of the media company is in motion.

The next day at Marty’s house, his son Roscoe, his granddad Jeremiah, and his granddad’s girlfriend Chantal are going camping. Roscoe is mad at Marty for telling him he could no longer see his boyfriend Lex, so it seems that this trip will give them some needed space. Back at the office, Doug foolishly asks Caitlyn out on a date to the art gallery in Chicago even though he is married to his wife Sarah.

In the meeting that day, Marty learns that the Mclintoch family has been pumping the company’s numbers and he realizes that there is another play. He uses this other play to get back at Clyde for his previous betrayal. After the meeting Jeannie tells Marty to cut Clyde some slack and go with the Zanino plan. Later at lunch Doug, much to his chagrin, learns that his wife Sarah is coming to Chicago. This will ruin the plans he has for him and Caitlyn. Back at his house, Marty invites his ex-wife Monica over for a romantic rendezvous and after they chat about their lives and their son Roscoe.

When the pod arrives at the airport Doug’s wife Sarah learns about the art gallery. And after Jeannie and Clyde’s insistence she decides to tag along as well. When the pod arrives to the Mclintoch meeting, the plan works perfectly. Zanino comes in and scared the media group into putting control of the company back into the hands of Clarissa. When Zanino leaves the meeting, Marty chases after him and tries to convince him to buy out the company for real and take it over himself.

Zanino rejects that offer because he would never try to hurt his ex Clarissa. At the art gallery, Doug is very condescending to his wife Sarah and insults her lack of knowledge of art. While this is happening Sarah starts to realize that her relationship with Doug is starting to fade into the distance. At the airport, Sarah confronts Doug about his lack of commitment to her and she tells him that until he gets his mess together their relationship is over. The episode ends with Clyde going over to Marty’s house and begging him to put the baggage that they have behind him. Marty reluctantly agrees and they appear to have buried the hatchet.

The previews for the next episode show Marty and the pod back with Lucas (played by TI) where they appear to be filming some type of movie or music video. Be sure to tune into that next week and look for our recap of the next episode.