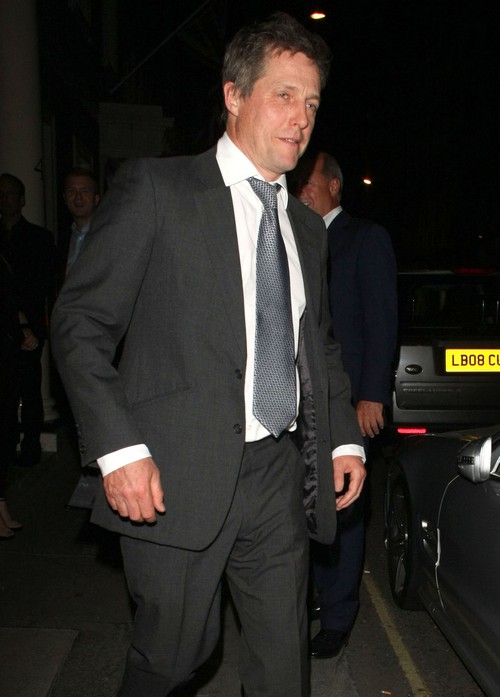 To absolutely no one’s surprise, it turns out that Hugh Grant may have fathered a third secret child with another woman in 2012. Keep in mind, this comes after the two love children that Hugh has already fathered with his ‘secret’ girlfriend in 2011 and 2012. So he basically got two different women pregnant three times over two years. Jeesh, talk about moving fast.

Anyway, the Sun reports that Hugh is the father of a baby boy whose mother is Swedish TV producer Anna Elisabet Eberstein. Although Hugh’s name wasn’t on the birth certificate at the time of birth, it’s reportedly been added since then, which is when everyone found out the news.

A source tells the Sun, “Anna is being supported by Hugh all the way. She lives in a very comfortable property and knows that Hugh is there for her. Anna’s parents in Sweden know all about the relationship and she has their blessing.”

Well, at least he’s supportive? There’s plenty of men, even celebrities with oodles of money, who’ll look the other way and refuse to pay child support. Of course, Hugh’s reputation would be ruined if he did such a thing, but it’s not like his career is doing all that hot right now anyway.

So far, Hugh hasn’t commented on Anna or his new baby boy, but he did comment on his other baby mama, Tinglang Hong. He had admitted that they had a ‘fleeting affair’, although I wouldn’t call fathering two children with one woman a ‘fleeting’ affair.

What do you guys think about the revelations of Hugh having an affair with this Anna person at the same time as his affair with Tinglang? Does it surprise you to know that he had another love child? At the rate he’s going, I wouldn’t be surprised to see another few kids pop up years down the line, claiming that Hugh’s also their father.