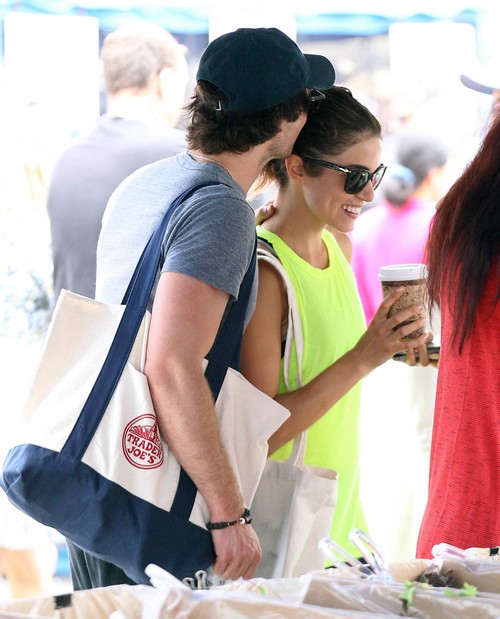 There’s a big difference to the way Ian Somerhalder is behaving with Nikki Reed than he did with Nina Dobrev when they first started going out. Whether it’s because of the fan interest in the Vampire Diaries or because of their age difference, Ian kept his relationship with Nina quiet whereas he’s doing the complete opposite with Nikki. Maybe it’s the inner famewhore in him finally coming out? Or maybe he’s trying his best to shut the tabloids up, and prove that he’s actually over Nina. Or even more likely, what if he’s trying to increase his visibility in the media to land more film roles? It wouldn’t be the first time a couple used their relationship to improve their careers [cough, Kaley Cuoco and Henry Cavill], and it won’t be the last.

Either way, Ian’s not hesitating at all in going public with his new relationship with Nikki Reed. He and Nikki were spotted last week being extremely lovey-dovey and affectionate in public, and Ian is continuing to support Nikki on social media and Instagram. When Nikki used her Instagram to help a puppy named Kate find a new home, Ian re-tweeted her message on Twitter, writing, “Iamnikkireed’s photo http://instagram.com/p/qzWip4M9Fx/ some one please give Kate a GREAT HOME!!!! PLEASE!”

Aww, isn’t that nice? Ian doesn’t care if people are talking about his romance with Nikki, and in fact, he probably wants people to know about it. His new movie The Anomaly is coming out soon on VOD, and as such, he’s prepared to do anything and everything to prove that he’s leading man material – including supporting the fact that he’s still a major tabloid draw, even after his breakup with Nina.