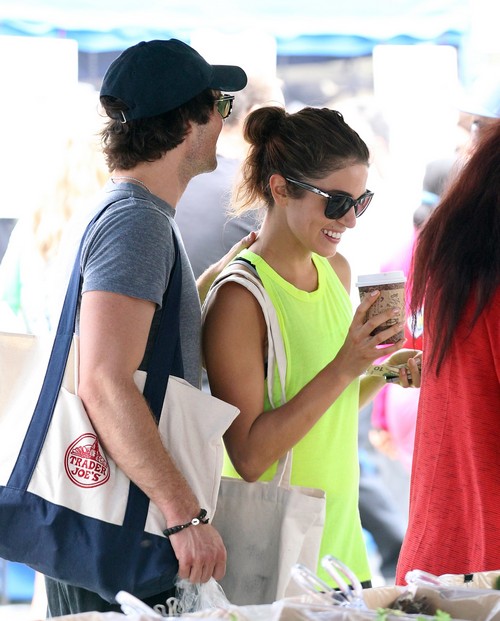 The Vampire Diaries fans were in an uproar yesterday when Ian Somerhalder was photographed out jogging with Twilight alum Nikki Reed. Rumors that the two stars were dating took the internet by storm. Once could argue that Nikki and Ian were simply friends, out together getting some harmless exercise. However, today Nikki and Ian were spotted again! And, they are clearly more than “just friends,” they are dating.

The on-screen vampires apparently spent the weekend together, and on Sunday July 20th they took a romantic trip to the Farmer’s Market in Los Angeles. Somerhalder and Reed were inseparable, and Ian couldn’t keep his hands off from Nikki. While they browsed through the market he kept his arm around her almost the entire time. And, he was even photographed hugging Nikki from behind while she shopped.

It looks like Ian and Nina Dobrev are definitely off again, and while he was spending the weekend with Nikki Reed, she was hard at work in Georgia on the set of their CW series The Vampire Diaries. Nina actually caught some major backlash online today when she was charging her fans $5.00 to watch her live online question and answer session.

Ironically, several media outlets were just reporting a few days ago that Ian and Nina were getting back together because they were on set together filming Season 6 of The Vampire Diaries. Either the rumors were nothing more than rumors, or Ian Somerhalder has some serious explaining to do. Nina Dobrev is probably in her dressing room right now having a major melt down, while Ian is frolicking around California with Nikki Reed. Hell hath no fury like a scorned vampire.