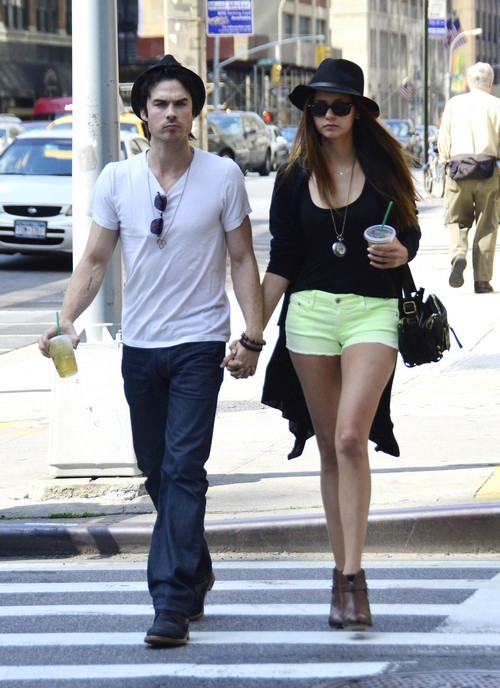 Nina Dobrev and Ian Somerhalder are still refusing to go public with their reconciliation, although the increased media interest in The Vampire Diaries stars’ relationship probably isn’t helping things. However, sources add that the couple still has some ways to go before they make things official again, especially since Nina’s been having some major trust issues concerning Ian.

We don’t really know the full reason for why Nina’s and Ian’s relationship ended the first time around, but we’ve heard a lot of theories. One of the most repeated theories was that Ian cheated on Nina, and that she couldn’t forgive him for that. Understandably, they ended up breaking up a few months later, and they somehow managed to put that behind them. Of course, if the rumors are true and they’ve gotten back together over the past few months, they’ve clearly been able to move past their history together. But now, sources are claiming that Nina’s scared of getting back together with Ian permanently because she’s worried he’ll cheat on her again.

Technically, Ian did supposedly chase Nina this time around, even though she was fine playing the field and hooking up with other men – for example Michael Trevino her Vampire Diaries co-star. If she gets serious with Ian again, who’s to say that she won’t get heart broken? It’s obvious that she’s trying to keep herself from making the same mistake twice, but will she manage to forgive Ian completely and give him a second chance? We had assumed that she did already, but maybe she’s still waiting for him to earn it. Or maybe she’s just too scared of taking the leap, considering their age difference plus the fact that they won’t be on the Vampire Diaries forever.