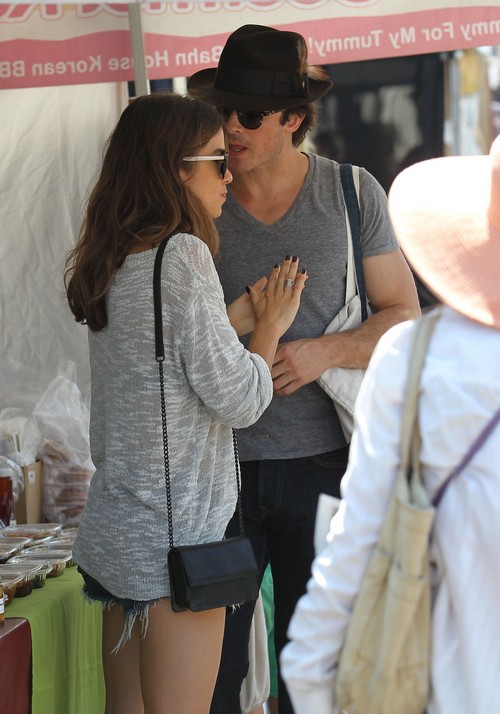 Nikki Reed and Ian Somerhalder are totally not hiding their relationship. In fact, they’re doing exactly the opposite – they are flaunting it every chance they get, including at the highly publicized Teen Choice Awards held over the weekend. They were kissing, they were hugging, they were holding hands, and they were making it really, really obvious that they were dating. And good for them, right? At least Ian’s finally found someone his own age that looks like she wants to get married [again].

However, several sources tell us that Ian’s and Nikki’s PDA isn’t just an innocent result of their romance. No, apparently Ian has been more than conscious of the fact that this lovey-dovey behavior gets a lot of notice from the media, and eventually makes its way back to Nina Dobrev. From the way we’re hearing it, Ian is still sore at the fact that Nina moved on from their breakup so quickly, and that she’s had so many public flings in the following year. Obviously, he took a year to find a new ‘official’ girlfriend, and she’s already been linked to, what, 10 different dudes?

So yes, maybe his PDA with Nikki at Comic-Con and the TCAs isn’t just an accident. Maybe the cameras didn’t just capture it in the ‘moment’? Perhaps Ian knew exactly where the cameras were, and knew that playing up his romance with Nikki was going to get back to Nina somehow. Or perhaps he’s just super into Nikki, which does make sense since it’s the beginning of a new relationship and all. Even then, I have a hard time believing that getting back at Nina doesn’t play some small motivation in his actions, even if it’s not the predominant driving force.